Happy New Year to you all!  A little late.. but better late than never :)

Over the Christmas holidays we managed to get to the cinema for my birthday treat.. we watched The Hobbit.. and how I loved it!  I'm looking forward to seeing it again - though will wait for it to come out on DVD -  and can't wait for the next instalment.  It was really magical and creatively inspirational too.  I was VERY taken with the fabulous hats worn by a couple of the characters..


By the time I came out of the cinema I was already working out how I'd go about making my own felted version of Bofurs hat - which is sheepskin in the film.  I had the rest of the family holiday to think it over and when everyone went back to work and school I got stuck in.  This is my first attempt..


I started by roughly sketching the shape, making notes and working out how to cut the flaps.. Then cut a draft resist from newspaper, I use this as a template for cutting my resist from foam floor underlay. 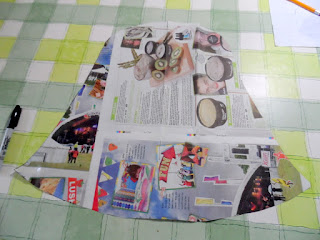 I decided to work inside out for a change on this project.  The design I decided to add was inspired by cup and ring marks carved into rocks by prehistoric people.  I had done a similar design on a pouch before Christmas and found that the design didn't incorporate into the felt as easily as I had expected it to.. thought I'd work inside out and see if that helped.  Also as I was lining it with nuno silk I thought that may work better laid down last so I could see when the fibres had migrated through properly.

SO.. the first step was to lay out the outer design directly onto the resist 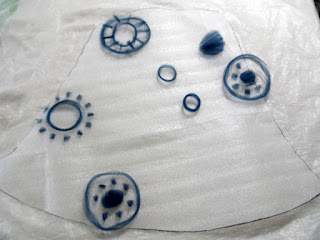 Then cover it with layers of merino.. 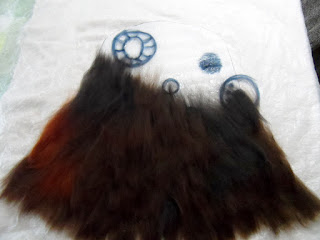 Two layers down, carefully flipped it all over and continued the design on the second side.  Then folded the fringe of fibre and finished the layers on this side. 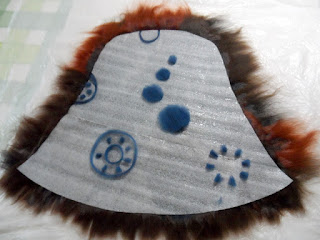 The last step was laying down the silk sari fabric that would become the lining. 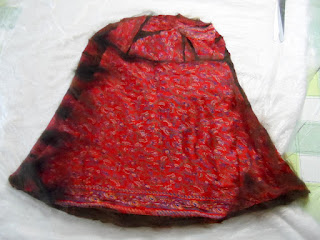 I lightly veiled the edges of the silk with merino, being extra careful to cover the edges of small pieces and all cut edges which sometimes can be harder to incorporate than torn edges. 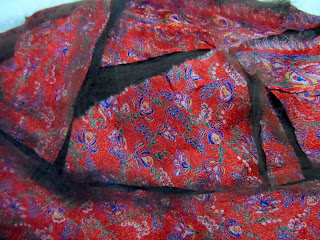 Wetted out and wrapped in plastic sheet. 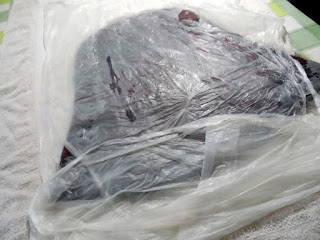 Then tightly rolled up in an old towel for a quick go in the tumble drier.. this helps the fibres to migrate through the silk fabric faster than rolling alone. 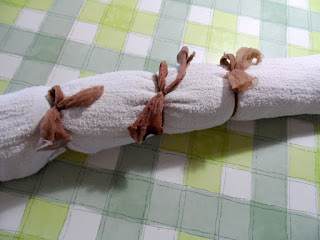 Sometime later, after the resist was removed and I turned it right side out, the design was felting in really nicely. 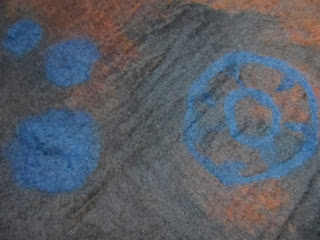 A few hours later.. shaping the crown over my rounded polystyrene hat block (treated myself to this just before Christmas I love using it).  This was so long though that I had to stand it on top of my old flat topped block. 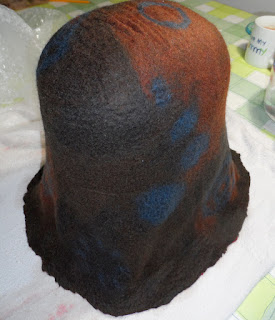 Used pins to mark where the front flap needed to be. 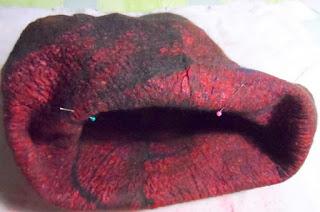 I did have a minor panic attack around about now.  I had worked out the way of cutting the flaps wrong!  They came forward rather than down.  So I cut them off and switched them over, stitching them on with red silk thread and working working working them!

They incorporated well and the occassional stitches are just another feature to me.. they're part of the hats story. 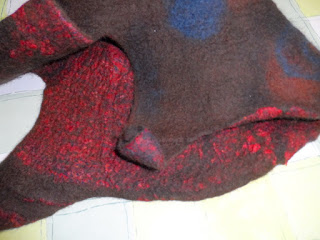 On the hat block again to dry.. the pins keep the front flap in place so it dries neatly. 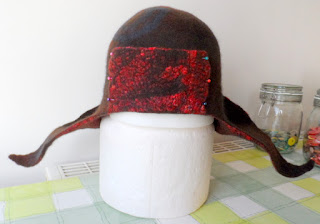 Did you see my buttons in the back of the last but one photo?  I finally got my button stash organised over Christmas!  I brought 5 kilner jars from Ikea and sorted all my buttons into colour groups, it is sooo much easier to rummage through and find the right buttons now.. I think they look pretty too - like jars of sweeties :)

Anyway.. there you go.. the story of my very own Hobbit hat :)  I have made 2 more now, tweaking the resist till I got it how I want it.. more on them soon
xx