When these were popular?
When I was a little girl in the 70's they were definitely 'in' and I loved them.. though I don't think anyone in my family ever had any.  I remember they had a lovely set in our local chip shop :)  and I used to admire them while we waited in the queue for our 10p bags of chips (you struggle to buy a bag of crisps for that these days).

Well a couple of weeks ago I suddenly remembered the flying ducks.. their lovely colours and how they made me feel happy just by looking at them  when I was little (or was that anticipation of the chips..? :).  I decided to have a go at making a set in felt.. You know how much I enjoy making critters..

Then I felted it..  Part way through I removed the plastic between the wings and allowed them to start to fuse together.. it was mostly the fluffy feathery bits sticking out past one wing that felted into the other wing.. it's enough to support the front wing and stop it drooping but it looks like 2 separate wings.  I removed the resists and finished felting.

Fibre of the Month - PROJECT

I decided to make a seamless tote with 2 integral pockets:

My inspiration for this bag was a pin I spotted on Pinterest, showing these gorgeous petroglyphs!  As soon as I saw them I fell in love and knew they would find their way into my work soon :)

I carried on working the felt.. fulling it 'till it had shrunk as much as it would go.  Then rinsed, spun, and stuffed it with tea towels to round the bottom out as it dried.

I like to reinforce the handle area of my totes.. especially the big ones.  I know I'd be tempted to fill it (even overload it :)  and sometimes this can cause distortion at the top of the bag.


Being quite loosely woven I used iron on interfacing to stabilise the fabric (so the edges didn't fray) before sewing a hem around it to match the shape of the top of the bag ... then by hand blanket stitched it into place with teal silk thread. 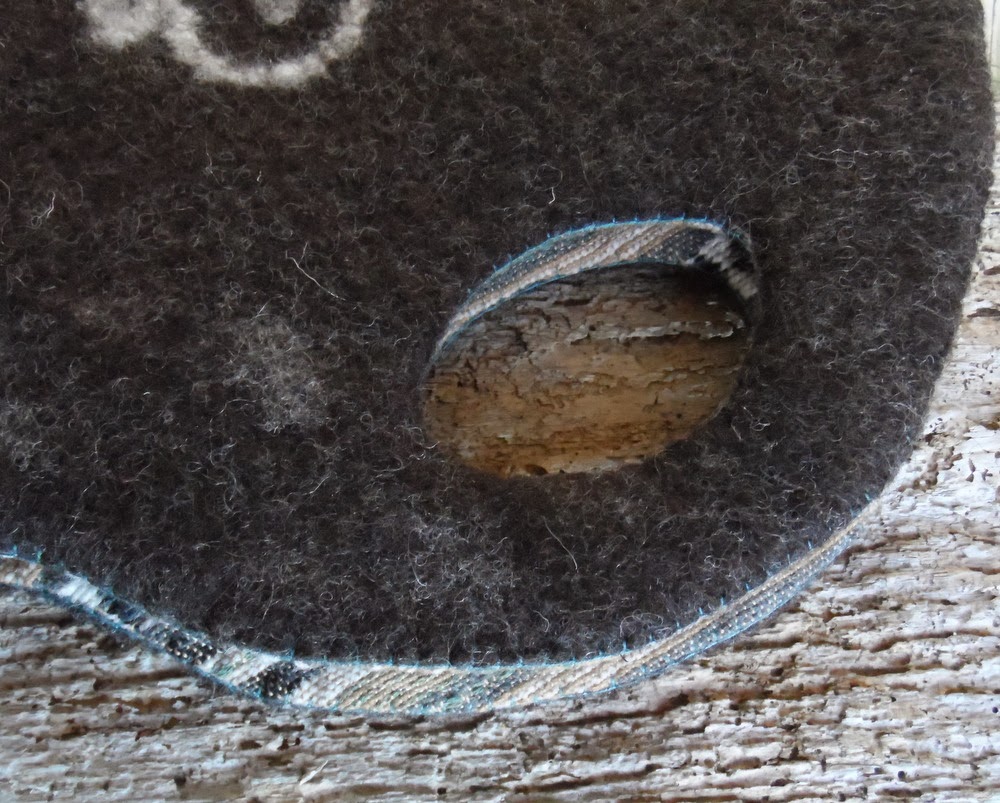 I'm really happy with this bag!  The Shetland has made a very cosy, tactile felt with loads of character.  It shrunk evenly and well.  The finished felt is nice and tight, with the design incorporating really nicely; it felted in easily without trying to distort. I will definitely be using Shetland more often in the future!

For comparison to sampling data

I'm not surprised that the shrinkage is less than 30% (as achieved in the sample).  The sample used 3 fibre layers and the bag was 6 layers each side.. more fibre = less shrinkage.

This year I am going to experiment more with new fibres..  Fibres I have either never used before, or not used very much.  I'm going to try to work on and blog about one of these fibres every month..

Micron 29-31  /  Staple length 90mm
Shetland sheep are one of the UK's oldest breeds.. brought to the Shetland islands by Viking settlers over 1000 years ago.  They are small, hardy, adaptable and very friendly.  Usually rams have curly horns and ewes are hornless.  There are 11 recognised fleece colours, and 30 recognised markings. Apparently of the names of the colours and markings are still the old Norse names.  More info at keepthefleece.

The very first fleece I ever had was a Shetland!  It was all lovely light browns and grey with a little white.  A lady I knew spent each summer living on the Shetland Isles as a Viking (re enactor) and at the end of summer came back with as many fleeces as she could carry.  This was many years ago, but I still have some of that first fleece unused.. it's special and waiting for a special project :)

For this feature I used Black Shetland tops.  The first step was to make a sample swatch.  I shall do this for each fibre and record the same details.  There was a brilliant tip for this in the September 2013 Felt Matters magazine article - CiFT Getting Started by Debbie Lucas.. as follows:

Make a 20cm x 20cm square, with lines every 2cm going in both directions to make a grid; so there are 10 squares across in each direction.  This is good for gauging shrinkage.. as each square represents 10% in that direction. Laminating the square protects in from water while using it.. place the laminated square beneath the bubble wrap and lay out fibre on top of it using the outside of the square as your guide.

And this is what I did :)   I didn't take pics as I went along.. it was just a square.  I used 3 layers, and felted it thoroughly to get maximum shrinkage.

There is one difference in my sampling from what the article suggested. Weight; I am laying out a specific size and no. of layers and weighing the finished felt sample.  The article suggests starting with a certain weight of fibre each time..  well I want to know how much fibre I will use for a set piece, not scrimp to make heavier fibres go further or layer it thick for light weights..

- I found that it stretched when I wet it out.. it ended up quite a bit bigger than I had laid it out.
- It is an easy felter.

This was a bit of a shocker!  It had stretched so much initially that when I fulled it to it's maximum shrinkage it was the same size as it started in the direction that only had one layer of fibre.

The finished felt is really lovely and tactile!  Strong and firm, slightly fluffy rather than hairy, but feels quite soft to the touch.  I don't think I'd use it for garments that are next to the skin, I think it could be a little itchy.

Lesson Learned
Be very careful when wetting out!  Wet the edges first making sure they don't migrate sideways, then work your way in.. and rub the outside edges first.  I did the samples edges first.. just not carefully enough I guess!

The next post will be a project made from Shetland..

Posted by FeltersJourney at 11:59 8 comments:

Before Christmas I mentioned that I had been playing around with machine embroidery..  time to tell you more :)

I had a few weeks thinking I was in imminent need of buying a new sewing machine.. and worrying over which to buy.  My poor old sewing machine, which is just a bog standard Brother that only cost me about £50 ten years ago is starting to struggle.  I certainly can't grumble.. it's served me well!  Then my mom gave me her (very similar) machine as she hasn't used it for years.. this was a lovely surprise! And I had a few days free.. perfect time put the new machine through its' paces and play around a little at the same time :)

First of all I finished sewing my curtains - such a relief to get them finished and hung in time for Christmas!  The machine purred like a kitten.. ran smooth as you like.. things were looking good!  I altered a skirt with a fairly light fabric, again worked it well.

Next I wanted to do some free motion embroidery.. For absolutely ages I have been wanting to do something inspired by the Bayeaux Tapestry - I LOVE the Bayeaux Tapestry!  It's one of my favourite pieces of art!  I have a lovely book about the tapestry which shows the whole thing up close and in brilliant detail.. so I picked a couple images and went to work.

I wanted to used machine embroidery to hold appliqué pieces in place, then add detail.

And another, slight/y different, approach.    I had used a straight stitch with the boat .. now I used zigzag for the geese.  Lightly needlefelting them in place again before starting to stitch.

Now I have to say.. this machine does not particularly LIKE embroidering!   Jumping and jolting.. not smooth at all.  So now I think I have to keep both machines till I can buy a new one..  My old machine which embroiders well still, but is a bit dodgy stitching anything heavy weight and can't wind a bobbin anymore.  And this one which stitches light and heavier weights and winds bobbins in the blink of an eye.. But is a bugger for embroidering with!

At least the pressure is off, I don't need to rush to buy one.. mom saved the day :)

Posted by FeltersJourney at 19:17 8 comments: