Oh my, the weather has been absolutely glorious this week!  Spring really is letting us know that she is here.. the irises, daffodils and crocuses that Rachael planted last year are flowering for the first time (they are lovely and she is thrilled with them :)  And we have a pair of blue-tits seriously considering nesting in the bird house Gary made just before Christmas.. its lovely watching them popping in and out and looking at each other as if to say.. "what do you think...?"  Another week has absolutely FLOWN by.. I hope you will forgive me dribbling out these posts.. I am so behind!  I really could use more hours per day.. or days per week (or a time-turner!)  Ok here goes..
My 2nd and 3rd Petroglyph projects this year were dainty little Ancient Sheep ROUND shoulder bags..

I wanted integral handles on these bags, and my lovely friend Heather at Woollove makes fabulous bags using a peanut shaped resist to make round bags with integral handles.. so I decided to ‘have a go’.  I stuck with the same colour schemes as with my previous petroglyph bags.. for the first I used 6 layers of merino in cherry red and turquoise, with my fave red slubby yarn swirled on the surface and ancient sheep drawn on in bitter chocolate merino .. then felted as HARD as I could get it. 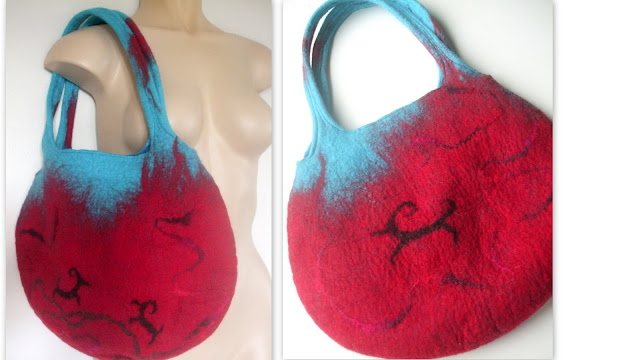 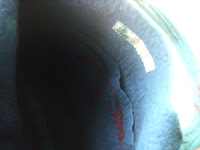 This bag found a new home the day it went into my shop :) and I was absolutely thrilled to bits to hear that another family are planning to hang it on the wall for display when its not being used.. what a compliment!!
The second bag was a little different..  Made over a pear shaped resist again, I decided this one would have a closure flap and single handle. 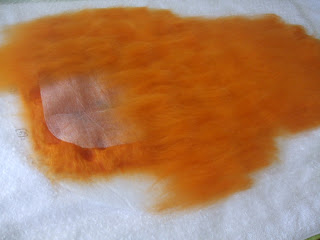 I laid down a design using LOADS of hand dyed silk caps in terracotta and brown, slubby red yarn and merino for the sheep.  I put one sheep low down on the front and two sheep low down on the back, so these are on the body of the bag.. but I wanted one on the flap too, so he was laid out on the BACK of the bag and upside down, so he would be the right way up when it flapped over.
I healed the cut edges and carried on fulling... and fulling.. and fulling some more, I rolled it, threw it, pummelled it, you name it I did it (well not quite I didn't stamp on it :) .  The only thing I had trouble with was the flap!  I had drawn the sheep too low down on the flap, and I couldn't get it to shrink enough for it to sit in the right place when the bag was closed - it partially covered the sheep on the front.  In the end I cut it off!  Trimmed an inch or so from the straight edge and then machine stitched it back on.. I used several parallel rows of stitching for strength and to make a bit of a feature of the join.
I was really chuffed to find the sew-on magnetic snaps.. they are really pretty, they have four 'flower petals' sticking out which you sew into to attach them and they're a lovely antique brass finish.  I don't like the normal magnetic snaps - the ones that have the metal prongs which go though the felt and a metal plate on the back.  I have found that they can damage felt.. the ones I used had too strong a magnet, and continued pulling on the felt to pop the opening caused the metal parts to cut through the felt.. That may of been a one off (and thank goodness it was on my own bag!) but I would not use them again.
The sew-on magnet snaps are nowhere near as magnetic - they are just right.  I stitched mine onto a small felt pad and then stitched the patch into the bag..
Next time:  Even more Petroglyph inspired work :)  hope you aren't getting bored
Have  a WONDERFUL weekend.. whatever you have planned!
xx
p.s. I am GLAD this post is finished blogger is being a real pain in the a*** - hope it is displayed right..
Posted by FeltersJourney at 10:12 14 comments:

Looks like this is going to be the year of the bad blogger!  I am SO behind with my posts.  No joy with the lions mane yet.. I tried something which was not succesfull, but have another plan in mind.. so more to come soon (hopefully).  SO, back to my original posting plan..
Another theme I wanted to work with this year was PETROGLPHYS and PICTOGRAPHS.  I felted a couple of bags last year which were inspired by petroglyphs, and its something I have been wanting to come back to since then. I had a boost when a lovely lady in New Mexico brought one of those bags and told me that she and her husband liked it so much that they were going to hang it on the wall when it wasn’t being used – what a lovely compliment! She asked me whether I had considered making petroglyph wall hangings.. which I had been planning for over a year and just hadn’t gotten around to. This gave me a nudge to GET ON WITH IT.
My new friend in Mexico has sent me lots of links and photographs of North American petroglyphs and pictographs, which have been very inspirational. One thing that amazes me is how SIMILAR many of the images are from different continents. Everyone perceives things in their own way, but some images (for example sheep) are depicted in almost exactly the same way, there are images which are wildly different – but its the similarities that pull at me.
My first wall hanging is very richly earth tones; gold, reds and browns. I made a thick piece of merino felt – 7 fibre layers; mostly gold but with a red border around the very outside. I didn’t want a solid band of colour but more mottled fading in and out. 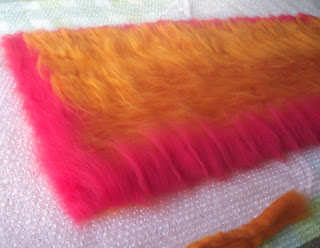 On top of the 7th layer I added some hand dyed silk cap in terracotta and brown.. then 'drew' the pictures on in brown and burgundy merino fibre. 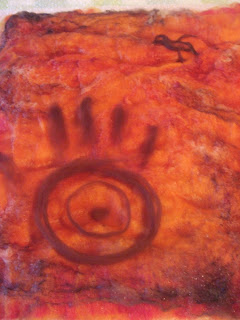 It made a lovely solid piece of felt.. (oh how I love the pebbly texture you get with merino!) Its a long, narrow piece – would of made a good table runner to be honest. 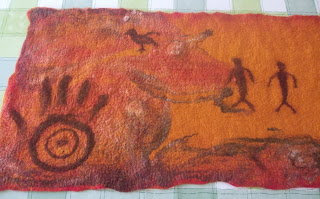 I decided to mount it on canvas to hang on the wall, as I didn’t have a box canvas the right size we made one. Gary made a wooden frame for me, and we stretched first calico and then Irish linen over the frame, stapling them (calico first, then the linen) at the back stretched as tight as a drum. Once that was done I could sew the felt into place.. I used an invisible stitch to attach it (I think its is called ladder stitch but I’m not sure – its one that you can’t see from the front anyway). 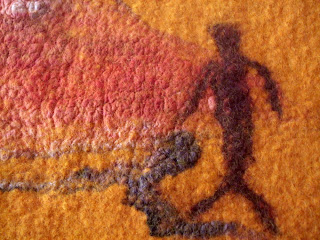 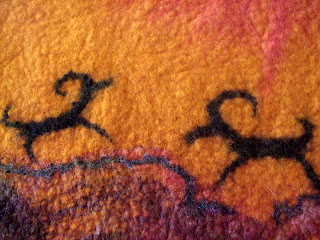 This picture is a keeper.. Gary and the kids took a shine to it and its a nice splash of colour in the dining room :)   The next wallhanging I make is going to be hung from a rail so it can be posted more easily.. I really must get to work on that soon!
Next post: Petroglyph shoulder bags - nice n bright :)
xx
Posted by FeltersJourney at 20:39 14 comments:

My lion needs a mane!  And I can NOT figure out what to use!
I had thought to use some naturally dyed BFL locks from last year... problem is I can only find one pack of them (think I might of overdyed the others) so I don't have enough.  I no longer have the right colour dye to do more.. the other wool locks that I have a just too WOOLY looking for a nice silky mane.. and silk would be too flyaway.  I had a piece of tibetan goat skin that I considered cutting up and sewing on.. but the fibre length is too long.
Please someone HELP.. I have been racking my brains and trawling my usual supply shops for something suitable to no avail.  I wanted to try brown or golden bamboo fibre .. but the only seller I can find is out of stock :(  Whats a girl to do?  Suggestions would be very much appreciated..
I want to get him sorted asap as he is part of my March themed pair of doorstoppers..
Posted by FeltersJourney at 15:51 10 comments:

The 4th and final (for now) Hundertwasser inspired bag

The shape is the same.. but this was inspired by Hundertwasser’s Antipode Island painting.. I can’t believe HOW long this one took to make..  I started building up the picture from the 4th layers of fibre out.. the picture wraps around the bag.
As you will see from the photos a lot more detail went into the fibre layout than is visible in the finished piece.. I didn’t take into account just how much detail can be lost with shrinkage and fulling. I spent a whole day just laying it out.. a day felting it THEN another couple of days faffing about embroidering and sewing appliqués! 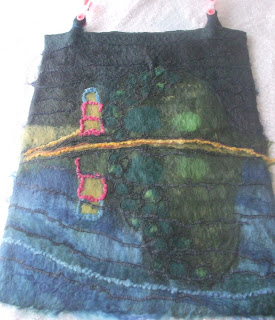 ﻿I used layers of different colour building up the picture.   The sky had bands of colour and dark blue yarn making lines between the bands.. this has blended in and gotten lost, as has the yarn loops that marked the tree line. 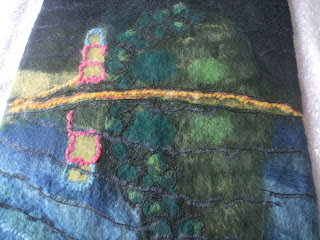 I used coloured yarns to define the tower and rounds.. and navy and charcoal yarn for the bands in the sky and water.﻿ 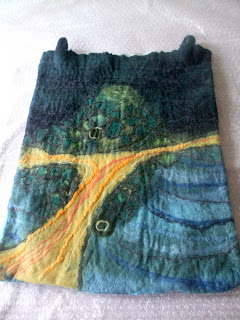 It was a little challenging wraping the picture around the bag.. getting both sides to work (the wrap side was easy enough it was the edges that took some figuring out).
I liked the way it looked before embroidering etc.. my hubby thought it could be left as it was.. but all long I had planned to add embroidery and appliqué  to the surface for some of the trees.   SO, I used hand embroidery straight onto the bag and on some of the patches, other patches are freemotion machine embroidered and then hand stitched on.
﻿﻿ ﻿I had a few ideas for how to represent the trees but didn’t want to use them all on the same bag in case it looked messy, so I have stored some ideas away for next time:)
The handle cord has the same bands of colour as the sky had, with the dark yarn between each band.
And thats it for the Hundertwasser inspired stuff at the moment :)
Posted by FeltersJourney at 20:43 6 comments: