I've had a real yearning for bright, rich colours lately (probably because of all the dull grey days).. and for interesting shapes and textures.  So playing around with all these scarves suited my mood perfectly :)

The third of my scarves..

Though it doesn't actually look much like a Tigerlily :) that was the inspiration.. 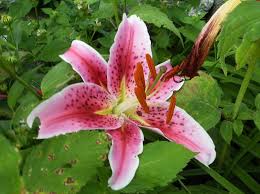 Lovely flowers.. I used to have a big pot full of these in the garden, but I think they died last winter.

Today I think I am going to do something bright and Hundertwasser-ish :)

Posted by FeltersJourney at 09:20 8 comments:

The second scarf was loads of fun :D

You can't see it very well on the photo, but I scattered green and turquoise blue tussah silk fibres first (straight onto the bubble wrap) followed by the first layer of merino fibre in lovely blues and greens.. 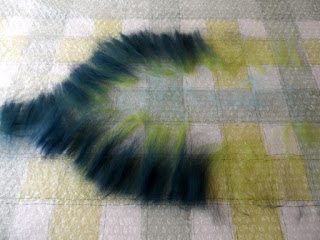 My husband says this reminds him of a millipede.. my sons says it looks like seaweed..  Brings to mind weird and wonderful sea creatures for me :)

Have a wonderful weekend folks  xx
Posted by FeltersJourney at 19:26 7 comments:

After finally satisfying my recent Hobbit obsession :)  I was very excited to PLAY.. I felt like making scarves, something I haven't done for a while.  The next few posts are all about them ..  The first three I had very clear pictures of them in my mind for about a week before I got round to making them.. and they are all veeery different :)

SO.. scarf #1
I wanted it to be irregularly shape and very frondy.. richly coloured with fancy yarns and silk sari pieces.

I really enjoyed making this one, I got totally into the zone.  Now, even though it's in my shop, I would SO love to keep it.. but you can't keep everything.
xoxo
Posted by FeltersJourney at 14:52 16 comments:

Yes.. I have been slight preoccupied with Hobbit-ish things lately!

I was thinking about teacosies.. and it suddenly struck me that they're hill shaped.. all of a sudden I had a picture in my mind of a Bag-End teacosy.. you know how it goes, once the image is there it's best to make it 'cos it won't go away until you do :)


Next I started building up the design.. the door, windows, steps, followed by flowers 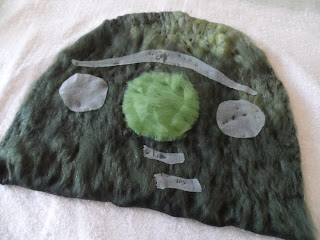 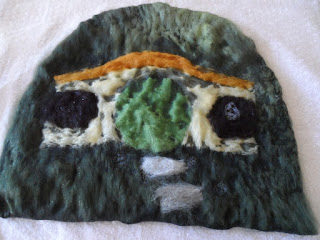 I forgot to take a photo of the cosy once it was felted, but before I embroidered..

I wanted to embroider the first line from the book onto the back of the cosy  'In a hole in the ground there lived a Hobbit..'  I thought about freehanding it, but wanted it to look distinctly Hobbit-ish and uniformly lettered.  After experimenting with drawing the letters myself I decided to print it off in Hobbit font, in different sizes


I must be a slow stitcher.. I seemed to spend ages working on this! I am glad I made it though, it was fun :)  And now my mind is free to move on to other things

The Radagast was much easier for me because I had Bofur's hat resist as a starting point!

I like how weather beaten Radagast's hat looks.. and I'm pretty certain from looking closely at the photo on the right that the one in the movie is felted (yay for felting!)  I wanted to make a hat inspired by Radagast's.. but there would be differences.

Much as I love the look of the movie hat, it looks like it's felted from a hairy fibre which I would guess could feel a little itchy.. so I decided to use Bluefaced Leicester.  Its coarser than merino but still soft and non-itchy on the forehead.  Plus I already had a nice bag of oatmeal BFL with tussah silk fibre blended in.  And I wanted it to be a ladies hat, so a little bit more daintily shaped :)

I managed to lose my progress pics making this hat - I honestly do NOT know how.. it's rather irritating.  So I shall have to settle for sharing a (hopefully not too boring) description of what I did..

I made a new resist.. outlining the resist from Bofur #3 and tweaking it.  Adding fullness to the crown, I wanted it to be loose enough to get the crinkles and folds.  I also changed the shape along the bottom as I wanted a deeper brim at the back.

I didnt use any silk fabric for this one, just 2 layers of BFL/silk fibre and a scattering of moss green merino on top.

I worked it, and worked it.. BFL is slower than merino.  But I basically worked, cut and shaped it in the same way as with the other hobbit hats.

The brim on this hat needed to be made separately and sewn on over the top of the earflaps.. I did this just before blocking.  When it came to blocking the hat I carefully pinned the folds and wrinkles how I wanted them to set.. but removed them before it was completely dry, gently massaging any indentations to get rid of them.

If I were to make another, I would alter the resist so the back flap was deeper and the earflaps less pronounced.. that said I really do like this.  I like the subtle colouring, the quills and the crinkles :)

So there you go.. all I've got left to do now is the Gandalf :)  And that will be coming later in the year (its been on my 'to do' list since the Lord of the Rings films 'bout time I made it!)

I worked this one outside in.  I found that I was more prone to getting ridges at the edge of my resist working inside out.. not sure why, probably just that I'm not used to working that way. The ridges were easily enough worked out luckily.  I DID find that the cup and ring design incorporated very easily into the felt working outside in as opposed to inside out, maybe because it all goes slower inside the package.

Hat #3 was going to have silk caps and fibres to embellish the outside so I didn't have to worry about that, and the silk chiffon sari I planned to use is an easy one.. I've used it for nuno before and know the fibres travel through fairly quickly..

I worked the crown on my hats block and blocked it in the same way as the last ones.. did take pics but picassa, or blogger, won't let me bring them over for some reason..

Now that I had 'the Bofur' sorted my mind moved on to working out 'the Radagast' :)  more on that soon!

Yesterday I showed you what my dogs were getting upto in the snowy weather.. here are a couple of my favourite snowy weather photos I took

Posted by FeltersJourney at 11:37 6 comments: