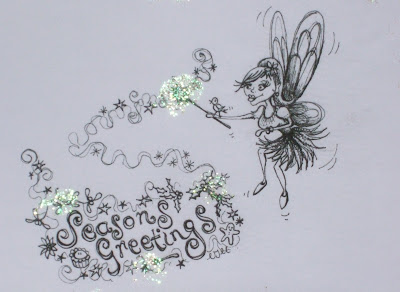 Posted by FeltersJourney at 20:42 No comments:

Well the Christmas Fayre is over & I had my last meeting at work this side of the holidays - I broken up now folks - YAY!
The fayre was lovely; I met some really nice people and when the choirs were caroling it was such a lovely atmosphere. The fayre was in the great hall of Hartlebury Castle, which is still the home of the Bishop of Worcester, it has a great high ceiling& flagstone floor - you can imagine what the accoustics were like, some of the carols gave me tingles! Unfortunately the table was TINY so it was overcrowded, & I didnt like the layout of the stalls - it didnt flow. That said my friend Nicci & me both had more success than at previous fayres. Nicci is a very talended artist - you can just about see a couple of her little paintings on the photo below - we had half the stall each & the tree was in the middle, so it shows a bit of both our work :o)
I hadnt realised how much stuff Id made until I wrote an inventory the night before - I think I had gone a little mad, I had so much stuff. Still it`ll end up on my etsy shop over the next few weeks. I took some photos, but most of them didnt turn out well... 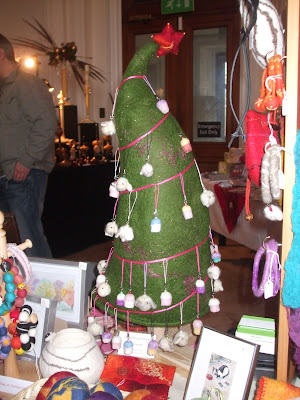 This is my felted Christmas tree - Im really pleased with it. Its seamless, felted over a resist, I scattered twinkling angelina fibre all over it before felting & some cerise sari silk fibre to give a tinsel type effect. I wound the ribbon around it to hang my phone charms from - thought it was a different way of displaying them. 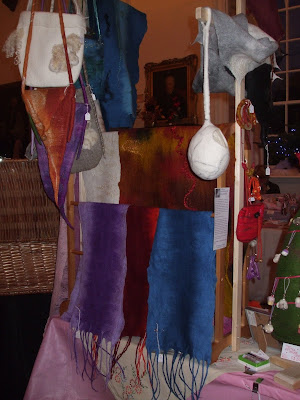 My lovely husband customized a wooden towel rail for me. Its a good job that he had, it enabled me to go UP with my display.

Unfortunately I now have a roaring cold which is slowing me down... and there is so much going on with kids at this time of year! My daughter (who recently turned 11) was performing, as part of her schools choir, at the Young Voices concert at the National Indoor Arena in Birmingham last week - its the 2nd year that shes taken part & loved every minute. They had so much practice & so many songs to learn - I would not be able to remember them all, Im amazed that the kids can; the concert lasted about 3 hours so you can just imagine how much they had to learn. Today she is dancing in the schools Cinderella production - she is Cinderella in the opening dance in her raggedy clothes (guess which momas gonna be sitting blubbering) and then shes singing in the choir. My sons school have decided to close early & the weather man is promising heavy sleet & snow for around the time that he shall be coming out.... not quite sure how to be at the play & collecting him yet?! Hopefully hubby will be home in time to help out....

Hope you are all enjoying the run up to Christmas :o) TTFN

Posted by FeltersJourney at 11:49 2 comments:

Hi folks!
I have been flat out the last couple of weeks getting ready for a Christmas Fayre this weekend (while juggling family & work etc - you know how it goes :) Good news is after this weekend I can really concentrate on the fun stuff that goes with the run-up to Christmas YAY!
Its at Hartlebury Castle, near to Kidderminster - Saturday & Sunday 11am to 4pm
This is the first fayre Ive been to with my felt - if any of you are there please find me and say hello ;o)
I shall be taking photos at the fayre & posting next week but if anybody is nearby & thinking of going it should be very nice & festive; theres the craft fayre (obviously), carols, a grotto, horse-drawn carriage rides around the castle grounds & more - Im sure I shall be feeling the Christmas spirit by the end of the weekend.
Have a wonderful weekend everyone - whatever you are doing
:o)
x
Posted by FeltersJourney at 16:10 1 comment: