How does my garden grow?

VERY well, thank you :o) This weather & lots of watering are doing wonders!
My purple sprouting broccoli is, well, sprouting :o) Not sure when its ready to harvest... its about 2 foot tall & veeery bushy, with little sprouty bits on a couple of `em. What do I do? Pick off the sprouting bits as they appear & it`ll keep on cropping? Or do I leave & pick the whole thing off & then the plant is finished? If anybody knows please tell me... there was no info on the tray of seedlings & I cant find it even googling. 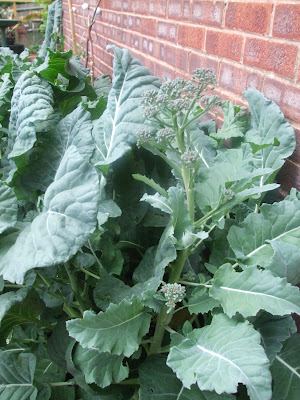 Its all lovely and lush down the side, as you can see :o) Lots of tomatoes & courgettes are coming, and the strawberrys have already provided a lovely big bowl full ... 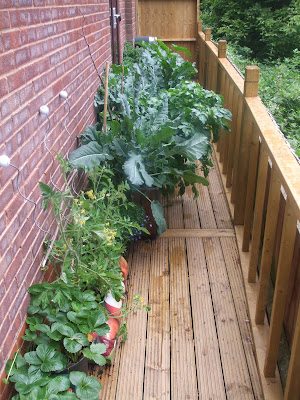 Beans, herbs and rhubarb are coming on... 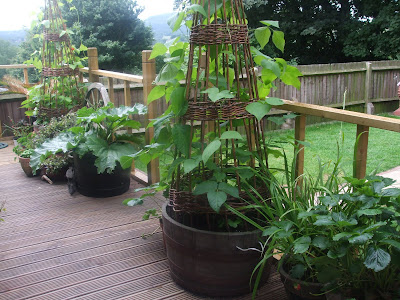 Elsewhere the tayberrys are ripening, & potatoes & onions looking good. Rachael is entering the junior section of a local gardening show in September - she has a dahlia and savoy cabbage growing for that :o) Will take pics & post another time.
Posted by FeltersJourney at 17:24 4 comments: 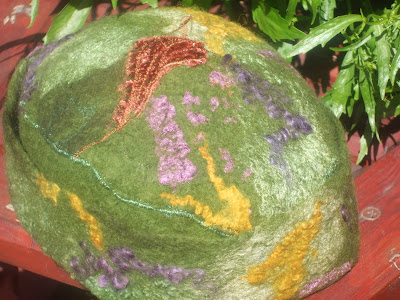 I made this one from Lizzie Houghtons Felting Fashion book. Anyone who knows me knows how RARE it is for me to make any project in a book, let alone for it to look remotely like the one in the book. But this little hat just looked so sweet, and I like the colours & just happened to have similar stuff in my stash, so...
Its 3 layers of merino, with oodles of locks & silk fibres, 100% silk velvet (YUM) plus silk/rayon blend velvet... notice how different the 2 look? The silk velvet felts in like a dream... doesnt even need locking in, the silk/rayon has felted in well but is more textural when finished & does need to be locked in just a little. I liked using them both together, its made the felt very tactile. When the felt was dry I did quite a bit of random machine embroidery, then sewed it up & added some more embroidery.

Just got to get someone to model it for me to take a photo now... getting bored of seeing myself under my hats :o) and Gary ran a mile when I reached for the camera.

Im off to enjoy the fabulous sunshine now :o) Have a good weekend folks xx

In between days at work and other mundane essentials (like shopping & housework) plus making the most of the sunshine with the dogs over in the fields :o) Ive done some really fun felting projects!

A few days ago I read a post on Daily Felt, Inger was asking if any feltmakers wanted to make & send starfish to a group supporting children with cancer. The group are having their 5th annual funday & want to give each child a starfish. Its a really touching post, and immediately I wanted to make a starfish & send it to help bring a little happiness.
More organised than usual :o) I took photos step-by-step... 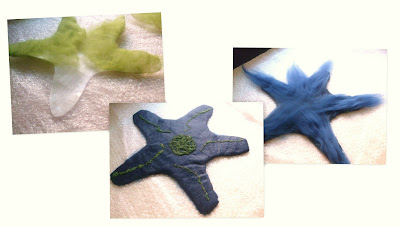 I started out by covering the star shaped resist with lovely lime green Icelandic wool; I wrapped around fine strips of batt until it was completely enclosed... I did 2 layers of Icelandic (the 2 layers perpendicular was interesting! :o)
Then I covered it with 3 layers of my favourite cobalt blue merino top.
For decoration one side was liberally sprinkled with sari silk fibre, and on the other side I layed out a design using a homespun boucle plied with a metalic thread. I crocheted a `wagon wheel` on a big hook to go in the centre.
Turns out the handle on our new French doors are perfect for drying this sort of thing on! 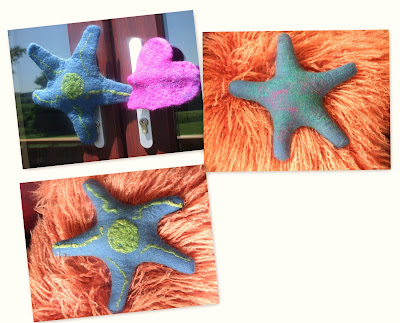 It made a really strong, sturdy felt... the sari silk twinkles & shimmers and on the other side theres just an occasional glint of metalic thread sparkling. I`ve stuffed it with clean / soft fleece from a local flock of free range organic sheep... Its very cuddly & tactile & measures just over 10".

I also made another hat! This is from Lizzie Houghtons Felting Fashion book (great book!) A little pillbox hat, as a sneak preview heres the top before felting... 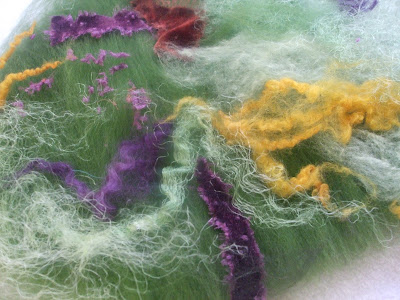 Well, thats it for now... Have a good weekend x
Posted by FeltersJourney at 16:08 4 comments:

Had a good day working at the Pirate event yesterday! Perhaps because I didnt have to ` oooaaaaagh` myself hoarse this time lol... trust me, its happened in the past! I spent the day working on pirate eyepatches with the children :o) The weather was beautiful till about an hour before the end when the heavens opened... I was close to a `pirate DJ` & steel band - luckily not playing at the same time.
The event was at Haden Hill House (lovely) which is one of Sandwell Museum Services sites. For anybody nearby its well worth keeping an eye open for upcoming events; theres quite a bit planned for the summer (as usual). SMS have a fan page on Facebook - Sandwell Museums and everything thats going on gets posted there, plus photos of the sites & news etc.
Not sure if Im just a bit tired today... or feeling unmotivated cos I know Im at work Tuesday & Thursday - so any big project I start is going to be interputed... Ah well, time to shake myself off & wake myself up & GET TO WORK!
Have a good week
x
Posted by FeltersJourney at 10:38 No comments:

This is my new bag, that I finished making yesterday!
I was inspired by the lovely bags that Heather at Wool Love Functional Fibre Art made & blogged about a couple of months ago... at around the same time I felted a big flat piece, trying out my goodies from the Reenactors Market. I decided at the time that it was going to become a bag... but Ive only just gotten around to actually putting it together!
First of all I had to find just the right leather belt for the handles... a few weeks scouring local charity shops got that sorted, its a nice well worn brown leather one - about 1 3/4" wide; I cut it with a stanley knife down the length to make 2 handles. I didnt cut all the way to either end though, which made it easier to sew on (with my leather needle in my sewing machine).
And then there was the lining. Eventually I found a lovely piece of fabric while mooching through my moms stash; its from one of my nans dresses - not sure exactly how old it is, but I think its safe to say its vintage :o) 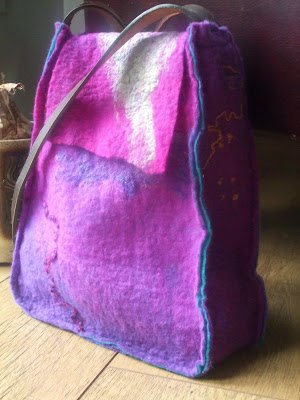 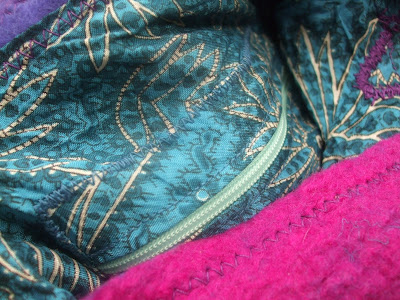 It has a nice zippy compartment & strong magnetic snap fastner
Today, Im dyeing a silk lap, impatiently checking whether the silk I dyed earlier this weeks dry yet...no! And photographing & preparing supply listings.
Have a good weekend folks - whatever you are doing... Im working at a pirate event on Sunday :o)
x
Posted by FeltersJourney at 14:23 7 comments:

has been pleasantly productive :o) in a gentle, plodding sort of way. I played with the silk saris on Monday... 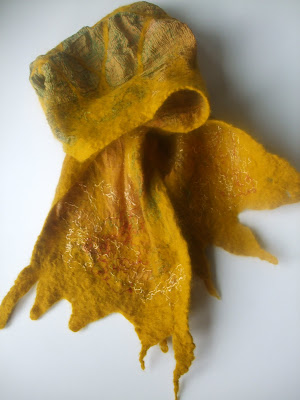 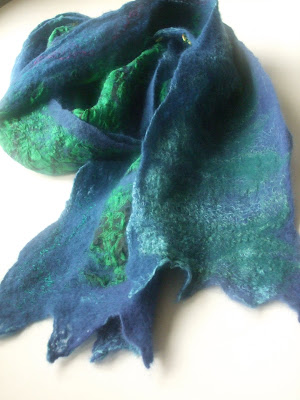 Green peacock silk sari in cobalt merino, with loads of sari silk fibre & yarn
.
Im wearing this scarf today :o) its all long `n skinny and feels really elegant to wear (you know when you feel like you look nice in something?!)
Plus Ive felted and sewn together another cushion cover... so now I have a pair; sun & moon... 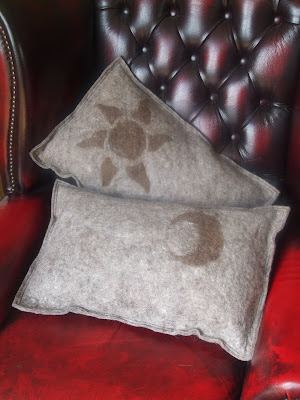 More Icelandic wool
And yesterday I dyed a load of silk ... which is still drying. I`ll post tomorow with photos of todays work, and hopefully yesterdays silk too.
x
Posted by FeltersJourney at 14:58 3 comments:

We had a wonderful camping trip in North Cornwall last week! And for once the weather did exactly what the met office had promised; Tuesday, the day we went, they said it would rain till 1 ish then clear up and be nice for the next 3 days. Driving down the weather was absolutely dreadful... rain so bad you could barely see anything - especially with the spray on the motorway. I kept think "ooooh, I hope theyve got it right" ... 4 of us plus 2 dogs in a tent in rainy weather are not my ideal (I hate the tent getting damp!) Lo & behold though, come 1.30 the rain was stopping & by 2.30 when we arrived it was great! We pitched in sunshine and a light sea breeze; the tent was up and all the stuff sorted within 30 minutes :o) and we were off! The weather just got better and better. Tuesday afternoon and evening were delightful, Wed, Thu & Fri were absolute scorchers - definately needed the factor 40! Here are a few of my favourite pics... 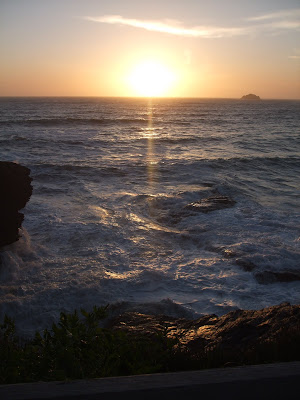 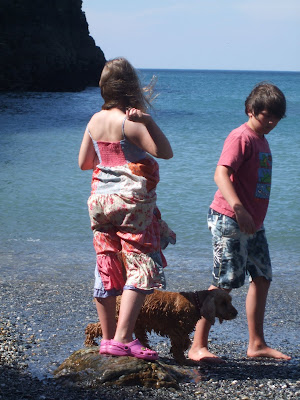 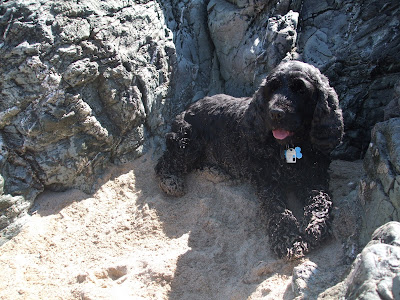 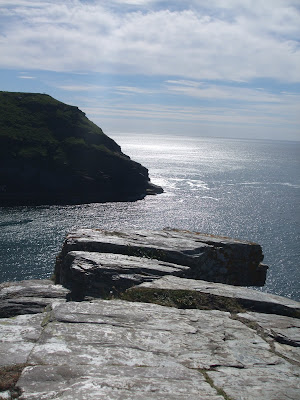 It was bloomin` cold at night though, I must say! I was wearing; shorts, thermal vest, thermal leggins, bedsocks & a fleece with my sleeping bag drawn up as much as possible just to be warm! First night I rather stupidly got in (while it was a pleasantly mild 11 o`clock) in shorts and T-shirt OMG I WAS FREEZING! I barely slept... was glad when I woke up down the gap between the 2 blow up matresses cos it was warmer :o) so I stayed there for the rest of the night.
We did loads of walking... out between 8.30 & 9.00 and walking pretty much all day till about 7.00 - there was lots of paddling, rockpooling,ferry rides and stopping to enjoy the scenery too of course.
We were lucky enough to see a pod of dolphins leaping in the mouth of the camel estuary heading toward Polzeath, a seal floating sunning himself at Tintagel, and what Im 99% certain was a Peregrine Falcon over the cliffs between Polzeath & Daymer Bay - AWESOME! Could only see him from beneath though and it was against a very bright sky so couldnt see his markings... the shape & size suggest Peregrine though and they are fairly common there. I didnt get photos of any of them though... I was too busy watching & enjoying them to take my eyes off long enought to find the camera!
Since we got back we have been playing catchups... Yesterday the kids were back to school & Gary at work - so I got a little felting time! Played around with the silk saries... shall have to post pics.
Anyway, Im off to felt ...maybe a cushion cover?
x
Posted by FeltersJourney at 09:37 2 comments: