I totally forgot to post about this on here (I remembered on Facebook)!  On the 17th February I went along to Oak House in West Bromwich.. a beautiful Tudor House where I worked for 10 years until turning full time felter, and have been in love with since I was 8!  They were having a fun day to celebrate some exciting developments on site, and had asked me to come along and create a piece of felt to commemorate the event.  It was to be a communal felt, mostly made from a local mule fleece that I'd spent days cleaning and carding, supplemented by other domestic wool; natural Jacobs and dyed Shetland.

The day went well.. there was a steady flow of interested people watching, talking and lending a hand when they wanted.  I was very happy when it came time to start rolling to find that I had 8 eager little helpers and a couple of mom's too.. many hands really do make light work!

The thing that really made me smile is that not one child passed by my table without popping a bubble on the 'oh so tempting' bubble wrap :)

I don't have any photos from the day.. it was just to busy to stop, I didn't even get a drink or bite to eat.  And it wasn't fully felted at the end of the day, so I brought it home for a couple more hours rolling, throwing and pounding.

The mule felted well.. I had actually expected it to be slower.  Maybe it was the extra hands speeding things up.. Whatever, it has formed a strong, thick felt.

I've sewn small brass curtain rings on the back so they can hang it if they wish, or use it as a table centre.  Not sure where they plan to display it eventually, but it will be there somewhere.. I shall have to go along in the summer and see where it's ended up :)
Posted by FeltersJourney at 11:51 7 comments:

Buttons fresh from the kiln..

Last night was the last week of term at pottery class.. I was so excited to get my goodies out of the kiln.  Over the last couple of weeks I have been making a set of 8 porcelain buttons (amongst other things :) .. hoping and planning to use 4 of them on this jacket.  I think I actually squealed when I saw them come out of the kiln in my teachers hand (glad she didn't drop them)!  They are just what I was hoping for.. and I hardly dared to hope that they would turn out as I wanted on the first try!

After pinching each button into shape I pressed it against a small bronze statue I have.. A replica of an ancient Greek Etruscan horse.  I'm not really 'into' ornaments but I do have a few favourites, and this is one of them.. a gift from my mom many years ago.  I didn't want uniform buttons so I'm chuffed to bits that each one is different.

I really like the effect from using oxides and transparent glaze..  Also coming out of the kiln last night:


And I got my first 'proper' sized mug :)  This one was hand built and is a bit wonky (lets say quirky :)..  but I like it.. and it fits perfectly to my hands.. the handle is comfy to my right hand and the rest of the cup fits perfectly into my left hand :)  There's a benefit of making my own mugs that hadn't occurred to me!   I have a big bag of dark red clay in the boot of my car to play with over Easter.. more wonky mugs will follow I am sure :)

This was a rather exciting week here in the UK.. not only was Friday the Spring Equinox (and what a wonderful first day of Spring it was!) but we had a solar eclipse.. also on Friday, preceded by a super moon on the Thursday night.

I decided to honour the heavens with my work on Thursday and Friday.. making a vest, similar to the Jacobs one in the last post but different..

For this one I used black and white Shetland fibre with lots of Wensleydale locks.  I had a clear idea in my mind.. and had scribbled a quick sketch on a scrap of paper the night before :)  I wanted an eclipsed sun motif on the back, a silvery silk mother moon riding just above the heart, locks fringing the collar front and bottom edges and white Shetland lines running up from the bottom.

I decided to use just 2 layers this time so it will be a more supple felt than the Jacobs.. white on the inside natural black outside.

I'm planning to add a branch button closure this week.. I'll post an update with all the buttoned vests / jackets later in the week :)

xoxo
Posted by FeltersJourney at 12:35 2 comments:

Last week I felted a long vest from Jacobs wool in natural brown, grey and white..  And I was a good girl.. I SAMPLED the fibre before beginning :)  So a year spent doing 'Fibre of the Month' really has paid off and taught me a lesson is seems :)

As with last years samples this was 3 layers laid down over a 20cm x 20cm square and fully felted.

SO.. time to begin :)  I wanted this vest to be long.. to be the same thickness as the back on my knit & felt Jacobs vest.. and to have the same motif on the back.  I also wanted a curly wensleydale lock fringe around the bottom, so decided to make it open ended.

The resist was almost 5ft long from shoulder to hem.. though I had allowed a couple of inches extra to stop the locks from tangling and felting.

I couldn't remember how many fibre layers I used for the back of my knit/felt vest, so I guessed at 3 layers..  But this felt feels quite a bit firmer/thicker than that.  The previous jacobs felt was made from a fleece I had cleaned and carded.. and the batts split into quite fluffy layers.  I'm wondering whether I had in fact only used 2 layers.. or whether it's a difference in the fibre itself.. if the first lot was softer/finer..   I'm not sure.

But the shrinkage was just what I expected from the sample!  Always good news :)  It took 650 grams of fibre to felt this.. I did trim the front flaps  and arm holes though.. probably lost a few grams there.

It reaches to a couple of inches above my knee

I must be a bit masochistic because I can't help thinking it would make a nice coat if I added sleeves.. what do you think?

Posted by FeltersJourney at 10:16 7 comments:

I've added sleeves to the nuno vest from my last post..  but totally forgot to take photos as I was felting them :(

More to follow when the buttons are added (I'm making some at pottery which I hope to use, but they shan't be ready for a couple of weeks).
Posted by FeltersJourney at 11:22 No comments:

I started felting sleeves.. but stupidly didn't realise that the rest of the bagged white fibre in my merino box .. actually wasn't the same as what I'd been using. A bit frustrating..  BUT my fibre order is due to arrive today and work can recommence :)   I'm working on buttons too..  so, more to follow.

I've had a go at making myself some felting tools at pottery class..  brought 'em home from the last lesson but haven't used them yet. 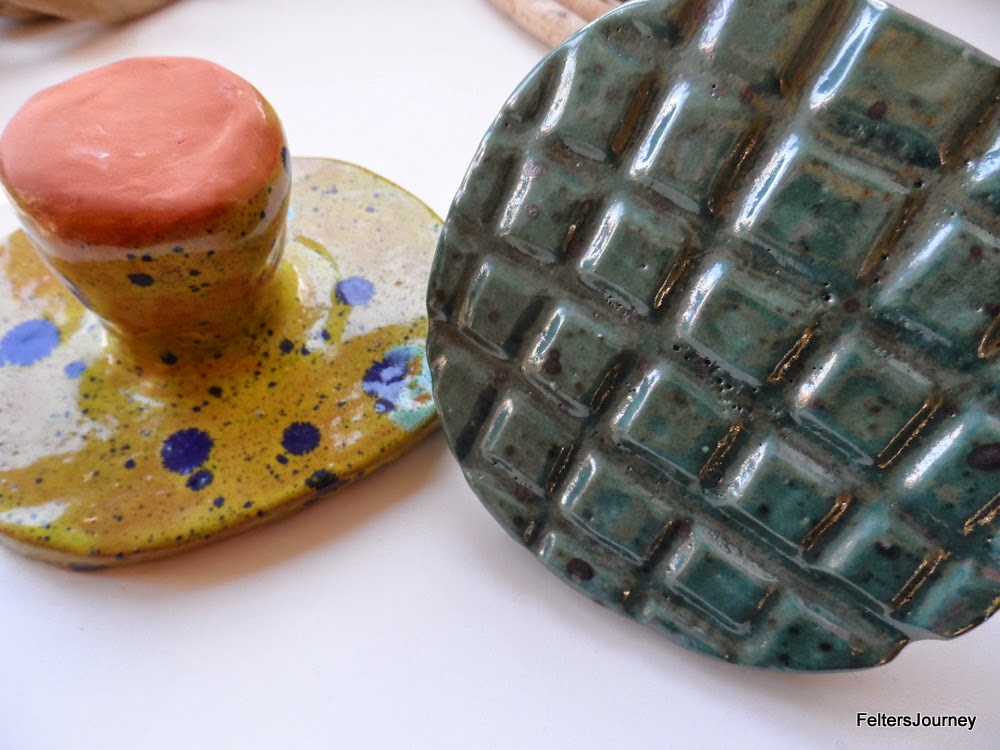 Posted by FeltersJourney at 08:09 9 comments:

Under the Beech Tree - March

According to the old adage March 'comes in like a lion and goes out like a lamb'.


In Norway and the Faroe it will be a total eclipse.. where I am in the UK it will be a partial eclipse follow this link to find out whether you can see it where you are.  Quite excitingly this is also Spring Equinox..

Some Folkloric Traditions and their origins..


For three nights Hercules Clay dreamed that he saw his house on fire. So convinced was he of impending doom that he moved his family out. They had no sooner left the property, when a bomb fired by Parliamentary forces during the English Civil War, destroyed the house. As thanks for his lucky escape, Hercules left £100 in trust, to provide penny loaves for the poor of the town.


This custom dates back to the twelfth century when Lady Mabella Tichborne lay sick and dying. She asked her husband Sir Roger to establish a gift (dole) of bread in her memory for those who arrived in Tichborne for the Feast of the Annunciation. Not thrilled at this prospect, Sir Roger said he would provide flour for the bread from as much land as his wife could encompass. A determined lady, she managed to crawl round 23 acres, an area still know today as The Crawls

Well.. that's my March musings.. hope you all have a lovely month xx