Time out with my family..

I've had a couple of lovely weeks with Gary & Rachael at home and Matt was off last week too, we managed to get a way for a few days of fun and sun at the seaside :)

A few of my favourite photos..

We scattered Jesse's ashes on our favourite walk while we were there..  our first time back without her, I missed my matie.. little sis took up Jesse's old position staying with me much more than she used to which was nice - I'm nearly always left behind, can't walk so fast as the long legged ones :)

Now we're home and the sun is STILL shining.. I love it!  Everyone is back to work now though, apart from Rachael who is enjoying her post school/pre apprenticeship break.
Posted by FeltersJourney at 17:09 No comments:

I'd been picturing this hat in my mind a lot over the last couple of weeks.. it's basically a top hat, but with a turned down brim that's longer at the back than the front, and with 3 pretty flowers sewn on.

I felted it in merino.. which is softer than the fibres I usually use for hats, but have used fibre 4 layers and worked it HARD to get it nice and sturdy.

Will post pics of it on a head soon.

I'm not sure what to call this style of hat.. any suggestions?  I think I'm going to make one in blue and green next :)

Posted by FeltersJourney at 09:12 4 comments:

Photos of the pixie vest :) 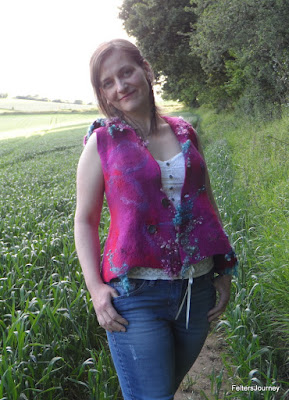 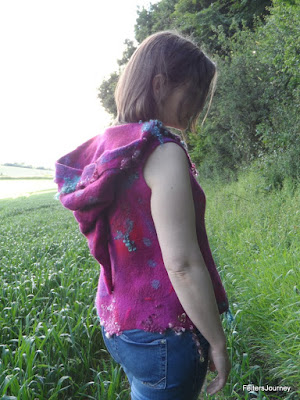 I love the little details on this one :) ... the textures and colour contrasts..

Posted by FeltersJourney at 20:38 6 comments:

Buttons for my Pixie Vest..

I found the PERFECT buttons for my pixie vest!  'Specially made by Karen at Wildcraft  ... just look at these beauties!  I'll definitely be going back for more :)


I think this one needs to be seen on really..  must get some pics taken and posted soon :)
Posted by FeltersJourney at 17:46 No comments:

The biggest project I worked on through May was a pixie hooded vest!  I made a really sweet blue one a while ago, but had an idea for getting 'proper' shoulders in there by working the vest and hood separately up to prefelt stage, then stitching the hood in place and felting..


It was a rather fiddly once the hood and body were joined.. but I must admit to being very pleased with the result.  And I have commissioned some really special buttons to go on it.. can't wait to receive them.. (really hope they suit it!) 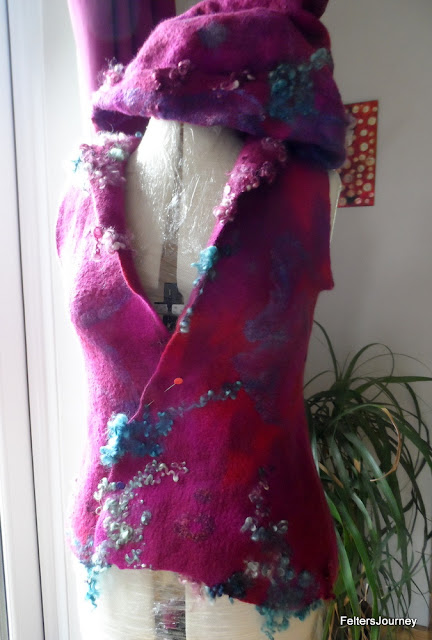 Posted by FeltersJourney at 20:12 5 comments:

Under the Beech Tree - JUNE

I have been a very bad blogger.. nothing for a whole month!  It's been an odd time lately.. I am looking after my mom 2 days a week now, so the past couple of months I've been trying to acclimatise to the new situation.. that's the delicate way of saying I have been running round like a headless chicken trying to get as much done as possible!  BUT this week I feel like I'm getting a grip on things... hopefully..

Walking across the fields this morning I really wished I'd taken my camera.. The first field is full of lush, young corn about knee high; looking out across it was like watching a large body of water, the wind was making waves and the sun sparkling on the tips of the corn leaves just like it shimmers on water.. quite mesmerising.  The next field has been ploughed recently and it's just a bare moonscape at the moment, but there were pretty white May blossom petals blown down in the strong winds we had yesterday and the night before.. scattered across the dirt track like spent confetti after a wedding.

I found this sweet poem on the internet.. sums June up pretty well I think :)


All in June
by William Henry Davies

A week ago I had a fire
To warm my feet, my hands and face;
Cold winds, that never make a friend,
Crept in and out of every place.

Today the fields are rich in grass,
And buttercups in thousands grow;
I'll show the world where I have been -
With gold-dust seen on either shoe.

Till to my garden back I come,
Where bumble-bees for hours and hours
Sit on their soft, fat, velvet bums,
To wriggle out of hollow flowers.

Sunday 21st June 2015 - Summer Solstice
Both the summer and winter solstices have been celebrated around the world since ancient times right up to present day. This year an estimated 20,000 people will flock to Stonehenge to watch the sun rise over these ancient stones. I've seen lovely photos online of a sea of hands (in silhouette) raised to greet the sun, but much prefer staying in the peace and quiet of my own environment, our woods and hills (just thinking of being in such a crowd is enough to give me the heebeegeebies!)

A Multitude of Music Festivals..
According to the UK Music Festival Calender online there are more than 60 music festivals during June!  I love the tip for festival gear on there.. a tent and wellies - so true :)

I do have a couple of projects from this month to share with you... just got to find time to get 'em on here now! :)

Posted by FeltersJourney at 17:18 4 comments: