This Christmas Eve I just wanted to take a moment and thank you for reading / following my blog.. To everyone who has commented on blog posts or contacted me through Facebook or my shop, it was lovely hearing from you :)


I hope that this Christmas and 2016 are full of peace, love and laughter for us all.. 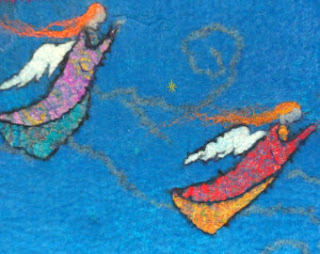 Nuno Angels from a couple of years back,
I haven't had chance to felt anything Christmassy this year..

Under the Beech Tree - December

Grrrrrrr no time for ANYthing lately!  Looking on the positive side our Christmas decorations are up, the lights are twinkling and things are very pretty indeed :)  All of my Christmas gifts are brought, the cards are written.. I just need to wrap, post and deliver.. then pack up my dining room, clearing all feltmaking / craft supplies out of sight until after the holidays.  I'm looking forward to seeing an uncluttered, festive dining room to be honest!

So, this is the last monthly 'Under the Beech Tree' post.. the year has flown by!

Anglo Saxons called this Winter monath or Yule monath, and after many Anglo Saxons became Christian they called in Heligh monath - Holy month.

Weather Lore says:
‘a green December fills the graveyard..’
&  ‘a green Christmas, means a white Easter’
Both because a mild December usually heralds a cold snap later in winter.

Superstition:  It's considered ill luck to cut a mince pie with a knife.

In December.. I shall be celebrating: my Birthday :), Winter Solstice, Christmas & New Year.

December is a time when we see lots of Holly, Ivy and Mistletoe being used for decoration.  Mistletoe has always been my favourite.. when I was young because I rather liked the tradition of kissing beneath the mistletoe :)  So I thought I'd share with you a Mistletoe myth..

The Viking myth of Balder and Mistletoe
Balder was the son of Odin and Frigg, his twin brother was blind Hodur (god of darkness).  Balder the Light was the most beautiful of the gods, and beloved by all.  He had a happy and carefree youth. But one day he started having bad dreams which left him in dread of the future.  His father Odin rode Sleipnir, his eight legged horse, to the underworld to discover what this meant..  To his horror he found that his beloved son Baldur was doomed to die.  He rode back to Asgard with a heavy heart.  When Frigg heard how her son was supposed to die she decided to do everything in her power to prevent it.. she visited everything in creation whether living or not.. the elements of earth, air, water and fire, birds, fishes and beasts, stones and trees, asking all to swear an oath never to harm Balder. There was only one thing she did not ask to make such a promise.. the mistletoe.  Frigg believed the mistletoe too small and innocent to possibly be a threat.

Once this was done all the gods believed Baldur was safe.. that nothing could harm him.  They had a great celebration feast and made a game of throwing things at Baldur; sticks, rocks, and anything else that came to hand - they all bounced off leaving him unharmed and laughing.

Now the trickster god, Loki, had always been envious of Baldur, and could not resist an opportunity for mischief and harm.  He disguised himself as an old woman and approached Frigg, asking her whether ALL things in creation had truly sworn oaths never to harm Baldur.  Frigg answered honestly that all things had indeed sworn.. save the mistletoe, and the mistletoe was far too small to worry about.

Loki went straight to the mistletoe and plucked a twig.  Back at the feast he sat down next to blind Hodur, commiserating with his that he was being left out of the fun.. since he had nothing to throw and none of the other gods had thought to include him.  The blind god agreed, so Loki gave him the mistletoe to throw and offered to guide his aim.  The twig hit Baldur going straight through him and he fell down dead.

SO, there you have it..  Hope you enjoyed story time :)

Enjoy the run up to Christmas folks xx

Posted by FeltersJourney at 17:11 No comments: