I forgot to post my owls!  I got a bit obsessed with them again in January.. I started out making cosies


And liked the look of them all together I decided to felt a picture panel featuring all 3..

I'd originally planned to applique the centres of their eyes on, but I actually like them as they are.. lamp like, and decided to leave them alone.

Posted by FeltersJourney at 12:08 6 comments:

Allow me to introduce..

Long Tall Short Fat Sally.. or Sally for short :)  L.T.S.F. Sally is a character from Terry Pratchett's Discworld.. a young witch who's allergic to tides.. she changes shape with the tide.

I've wanted a dressmakers dummy for ages and the Lady Valet has always been the dream model that I thought I would never own.. but now I have one :) yay.  I'm stupidly excited about her.. thinking of all the wearables that I can make so much easier now :)

I could do with getting a nice cover so I can hide the gaps and mechanics, and use her for taking listing pics too..

For many years now I have been buying the big 600g bars of olive oil soap from Wingham, but I only used them grated.. whenever I tried to cut a chunk off to use they just crack and crumble.  Which was a pain 'cos it's useful having a hand sized piece.  But it was a bit on the pricey side for me though to buy small bars of olive soap..  the big bars are much better value, just not so convenient.  So I just used vegetable soap from the supermarket.  Which was fine, but I'd of preferred to use Olive soap

WELL.  A little while back I was reading a listing for this soap on ethicalsuperstore.com and they actually had cutting advice from the manufacturer in their listing!  Brilliant!  I'd also read about using a hot knife to cut soap so I decided to combine the 2..  tried it out and it works like a charm :)

You need a pretty big knife, I found that I needed to push on the point end too to go through the soap evenly, so it needs to be plenty long enough.

Fill a bowl/jug with very hot water and stand the blade of the knife in it to warm up.

Unwrap the soap and stand the block on a microwave safe plate.  Pop it in the microwave and heat it up a little.  The instructions I read said to heat it for approx 20 seconds...  I found that it still cracked and crumbled after 20, so I popped it back in for another couple of 15 second bouts (I did it in 2 go's so I could check it wasn't heating up too much).

Dry the blade of the knife, and cut straight downwards through the soap (being careful of your fingers!)  If it still crumbled I popped it back in for a few seconds, being careful not to go too far - Google 'soap in microwave' to see what happens if you do there are loads of videos. 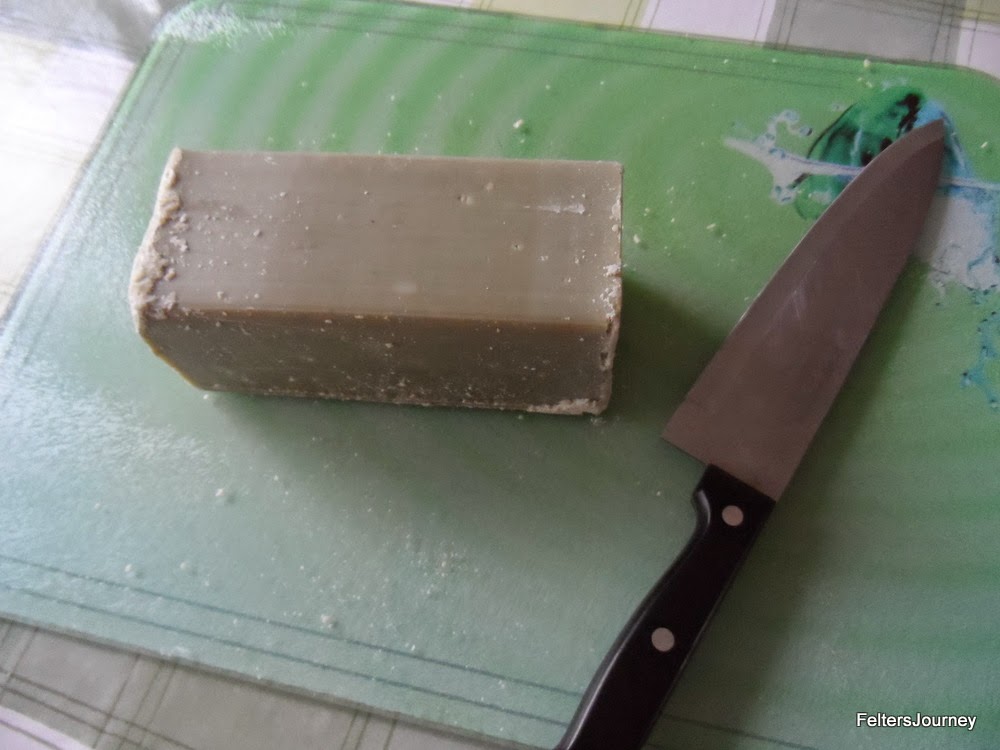 Working swiftly so the soap & blade don't cool down cut your big block into smaller bars.


I did have one failure with this method however.  I found a block of soap at the back of the cupboard that must of been there for a few years. Turns out really old soap is too dry for this method to work on.  The photos below show old and new soaps for comparison.

The old one was no good for cutting up, but as it's still fine for grating at least it shan't be wasted.

I was so happy to of found this tip, now I have lots of bars of olive oil handsoap :)  Perfect for felting with.  I'm sure there are many felters who have known to do this for years.. but I didn't and wanted to pass it on incase any of you don't.

Posted by FeltersJourney at 15:34 3 comments:

A few weeks back I received a beautiful gift from my dear friend Heather  - a gorgeous pair of socks :) and this beautiful leather journal that she made..

Which was really lovely because I had been wanting a nice journal for a couple of months, fancying having somewhere special to doodle when the mood strikes.

I didn't start on it right away.. but this weekend I used the first page (and really enjoyed it :) 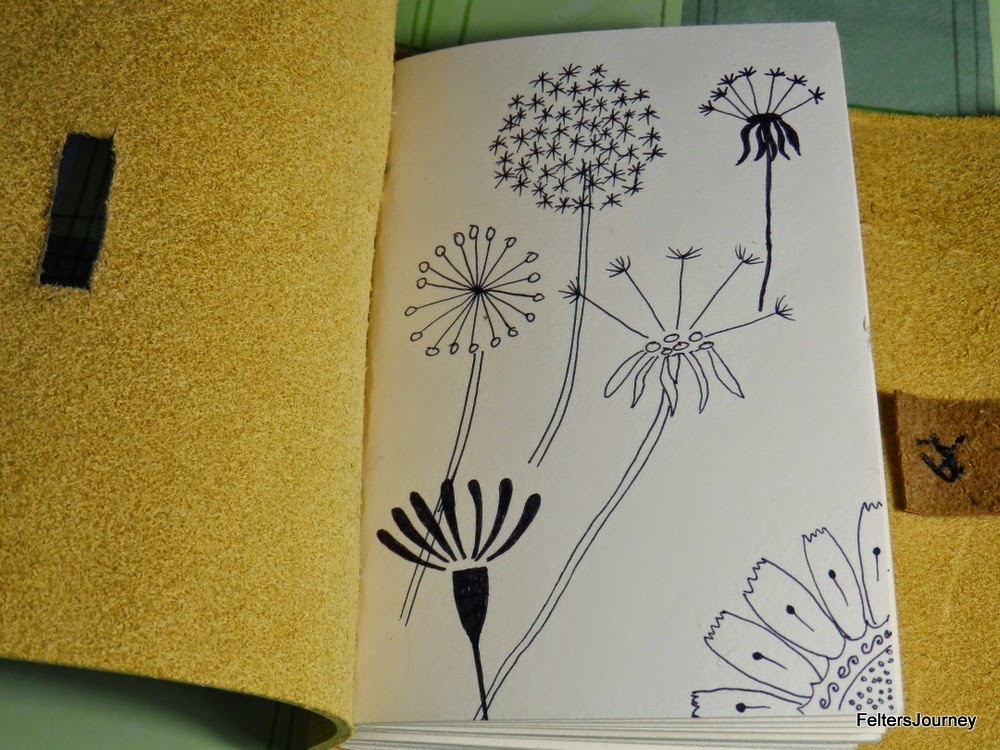 After enjoying my pen and paper doodling so much I decided to free motion machine doodle onto a couple of felt pebbles..
It's such a lovely journal that I would really like to fill the pages with lovely doodles.. shame Ruthie lives so very far away.. I could do with going to one of her workshops!   Hopefully some more of my doodles will be suitable for translating into freemotion on felt. :)

Posted by FeltersJourney at 19:45 2 comments:

Wooo Hooooooo!  I finished my waistcoat.. and I'm really pleased with the result, I'm sure I will wear this a lot :)

I decided to felt a panel for the back using the last 3rd of the fleece.. the dark fibre.  And I'm going to break from tradition by showing you the finished photos first :) cos I'm so excited that it's done.

Happy twirl with Gary snapping away :) 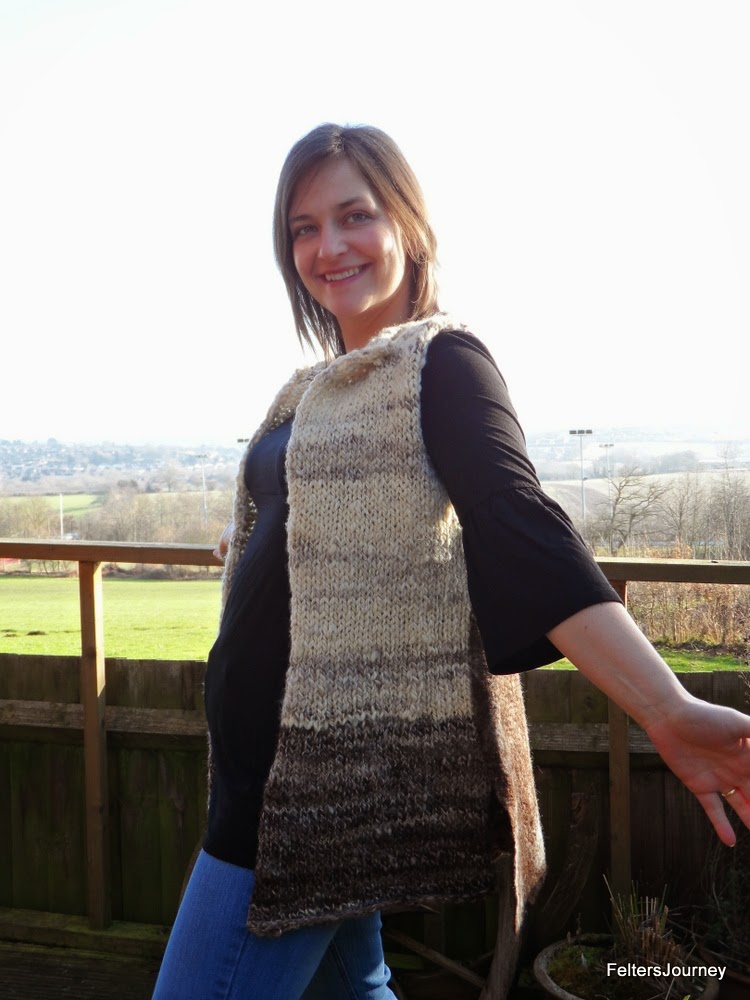 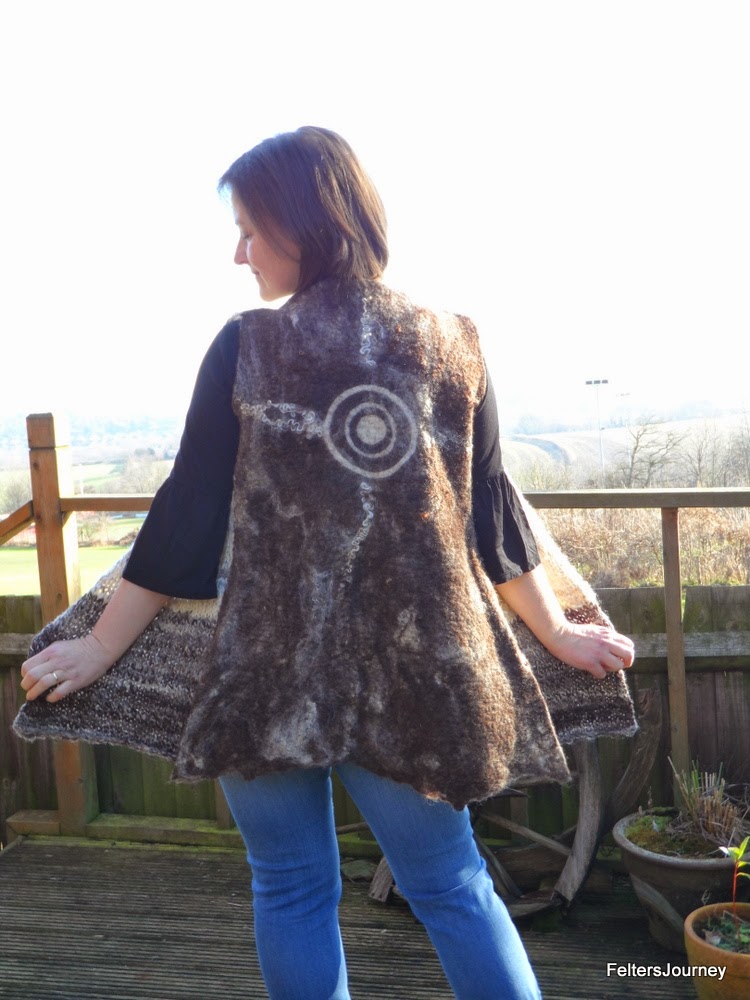 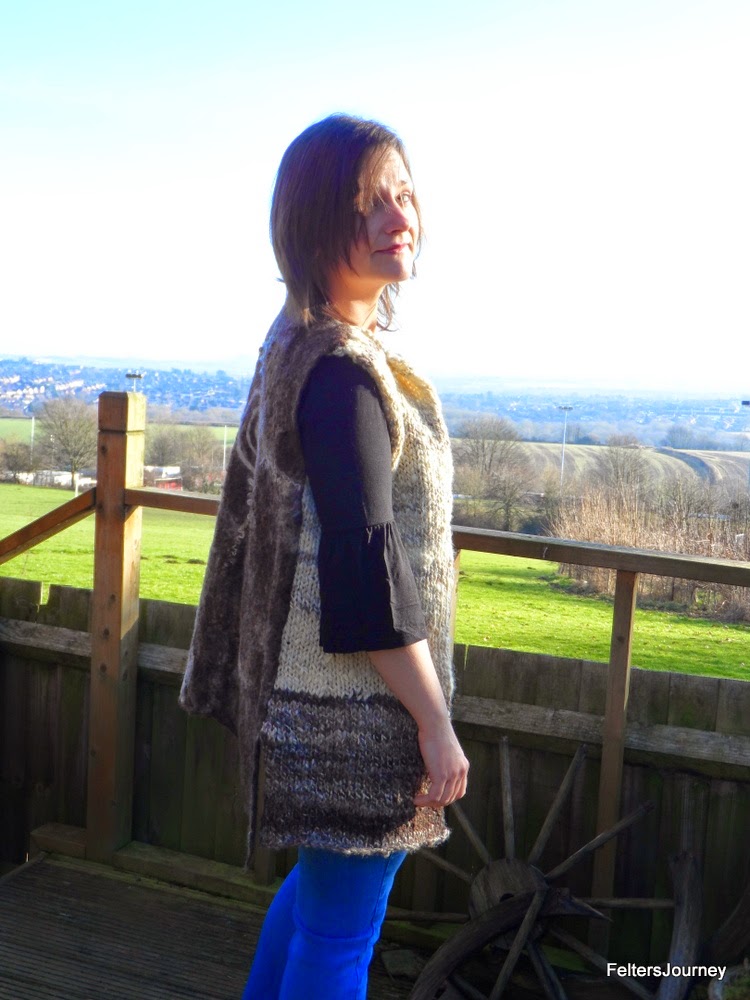 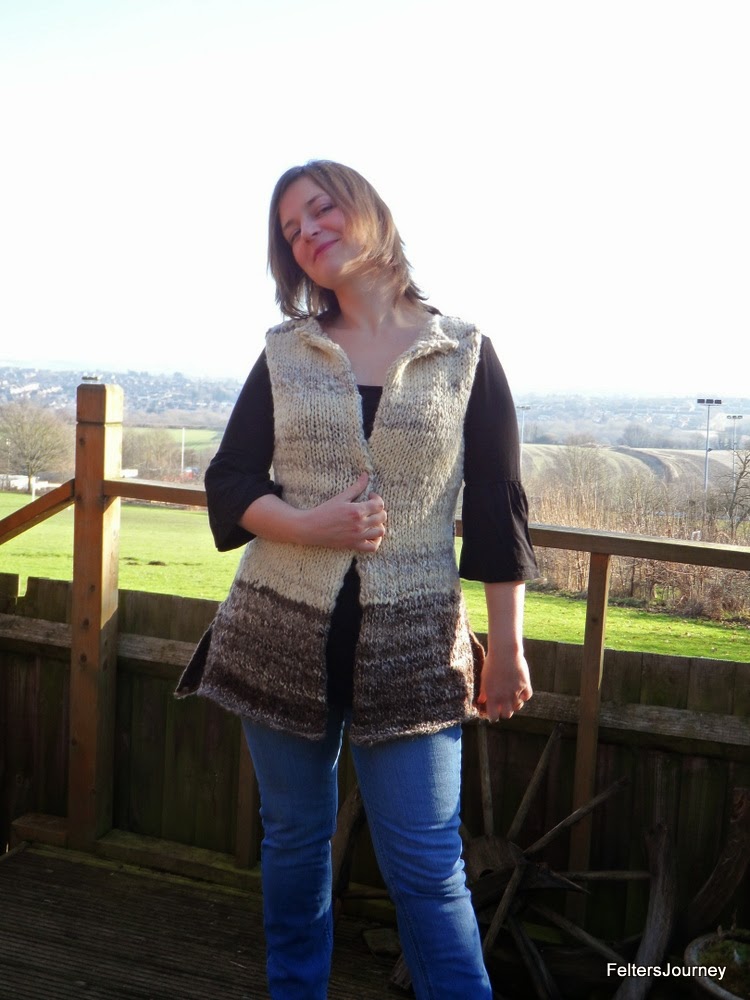 I haven't used a closure..  I tried branch buttons but they didn't look right, and I tried belting it but wasn't keen on the look.  I rather like it left open.. Though my brother in law has suggested a zip, which I may think more on.  I'll see how I feel after wearing it a few times.

I have to say I found felting Jacobs to be hard work..  It was fine once it 'got going' just seemed to take forever to get past the soft spongy stage.  I'd been thinking of felting a pair of boots to use up the last of the fleece and yarn (it would be nice to co-ordinate) but I'm not sure whether I can face it..  we shall see.

I really must get an adjustable tailors dummy.. I would love to be felting more tunics, jackets and other wearables and I'm sure it would be a HUGE help.
Posted by FeltersJourney at 10:56 4 comments:

Under the Beech Tree - February

Earlier names for the 2nd month in the UK..
* Anglo-Saxons had 2 names; sol-monath (cake-month) because cakes were offered to the Gods during this month.. and sproutkale from the sprouting of cabbage or kale.
* Was known in Wales as 'y mis bach' - the little month
* In the days of William Shakespear (around 400 years) it was known as Feverell - I like this one, it sounds lovely.

The modern name of February has only been in use about 100 years.

The snowdrops will be showing their faces soon.. 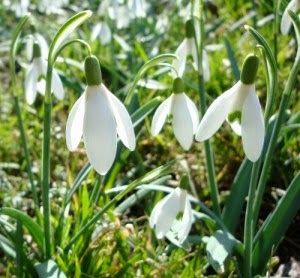 If Candlemas Day be fair and bright
winter will have another fight
But if it be dark with clouds and rain
winter is gone, and will not come again.

14th Feb - Valentines Day
St. Valentine was a pagan priest in third century Rome who converted to Christianity.. funny that he became patron saint of lovers since he was famed for his chastity :)

Tuesday 17th February is Pancake Day :)
We shall be having stacks of American Pancakes with maple syrup, Greek yogurt and fresh fruit YUMMY.  I never bothered about pancakes before.. I'd only had our British ones and didn't really like them.  For my last birthday, in December, a dear friend cooked me brunch.. with American pancakes - I loved 'em and I've made them for the family 4 times since!

If you have never tried them.. I use this really easy recipe from SomewhatSimple  - it makes lots of totally delicious, fluffy, American Pancakes. 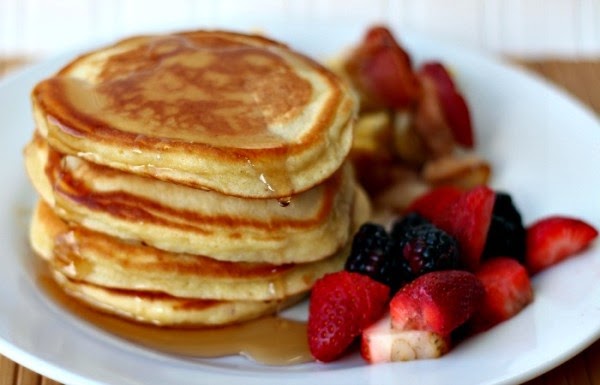 And of course every 4th year we get an extra day :)
Leap years day tradition: Women could, on this one day every 4 years, propose marriage to men.
Apparently it was once law in Scotland that men proposed to on Leap Years Day were forbidden to refuse.. if they did they had to pay a hefty fine.

Well.. that's all the February trivia.. hope you have a good month!