I mentioned recently that I had been working on a rather exciting Radagast project..  Well, it was a rather special hat!  This hat was bound for Comicon in Kansas City earlier this month, to be worn by one of the organisers.  And most excitingly of all would be meeting the ‘real’ Radagast.. Sylvester McCoy was attending Comicon.

The hat was very similar to other Radagast hats I have made, but slightly bigger to accommodate a wig.. and it needed ties like the one in the movie has.  I must confess right here and now that when watching the film I thought they were dreads in his hair.. but once it was pointed out to me I remembered seeing them tied behind his head in the 2nd film.  Stephanie and Chris, my lovely customers, sent me lots of really useful photos and info, and this was the result:
I packaged it up and posted it off, using Airsure (the fastest international option) 3 weeks before it was needed.. it should of got there in PLENTY of time.  Unfortunately US customs decided to sit on it.. then it took the scenic route from New York to Kansas.. arriving on the very morning that Comicon started!  You can imagine how nervous we all were..  I was soooo relieved when I saw 'delivered' pop up in the USPS tracker!

Stephanie and Chris have sent me a lovely email and some great photos from Comicon.. of their meeting with Sylvester McCoy.  Chris was (understandably) wary of removing the hat once it was in place over the wig and beard.. but they got him to wear the last minute emergency hat that Stephanie had whipped up incase mine didn't arrive (she did a fantastic job, especially on such short notice!)

I think their costumes look amazing!  Stephanie is a Valkyrie

Apparently Sylvester McCoy asked about the hat :) and they told him it had been 'specially made in England by me..  It is such a buzz for me seeing one of 'my' hats with the REAL Radagast! :)
Posted by FeltersJourney at 13:03 12 comments:

For my Fibre of the Month sample and project I used Icelandic tops.. in the post I mentioned that I also often used Icelandic Kemba batts from Alafoss in Iceland.  Now I haven't felted a sample square of the Kemba as yet, but I have felted this pair of boots and recorded the shrinkage..


I do love using these batts!  They come in a lovely range of colours and felt beautifully.

For slippers I break strips off the batt and pull tufts from the strip, laying it down much the same as I would for tops. It's easier to keep a uniform thickness to the layers this way.  Also I find that you don't need to overlap the edges of the tufts as much as with tops.. so long as they are snug up against each other, and maybe overlapping just a tiny bit they are fine.  I think this is because the fibres aren't lying all neatly going in the same direction as they do with tops.  With the batts even though there is a dominant fibre direction they are quite higgledy piggledy.  I think the batts felt is easier to mould into shape too, it seems to be more pliable.

xx
Posted by FeltersJourney at 17:38 4 comments:

This month, instead of a bag, I have felted slippers..  A bit of a copout maybe as most of my slippers are felted from Icelandic wool.. but I’ve never actually sampled it and calculated shrinkage rates properly.  And I figured it would be interesting information :)

I have recently been working on a rather interesting and exciting Radagast project which I shall be telling you about soon.. in the course of which my attention was drawn to Radagast's footwear.  Somehow I hadn’t noticed while watching the films, but he is wearing odd shoes.  One is a brocade slipper boot, the other a curly toed leather boot..  The idea of these odd boots caught in my imagination and I just had to have a go at felting a pair.  An odd thing to do really, make 2 boots which are totally different, but there you go.

I decided that the curly toe boot should be solid brown while the round toe boot, which would of been the brocade boot, was going to have colourful fabrics nuno felted in.  I chose a rich orange, patterned silk for the outside and green and gold silk for the fold over cuff.

I was rather under whelmed with the round toed boot.. the Icelandic fibres completely swamped the silk fabric, losing all hint of pattern on the fabric and there isn’t any of the lovely ruched & puckered effect you usually get with nuno.. it’s just sort of crinkled.  Looks rather messy really I think.
BUT I loved the curly toed boot!  I finished it off by sewing a felted (merino) leaf to hang from the side with one of my Hawthorn buttons on the ankle.

I decided to felt a mate for the one I liked and have a pair of curly toed elf boots instead of the Radagast oddies.

Posted by FeltersJourney at 10:33 3 comments:

Fibre of the Month - MARCH

This month I am looking at Icelandic wool.

Icelandic sheep are a medium sized breed, one of the North European Short Tailed type, related to Finnsheep, Shetland, Spelsau and Swedish Landrace. They are double coated.. the under coat, called thel, is downy and soft, the outer coat is longer and coarser and called tog.

Icelandic sheep are reputed to be very independant and do well on rough, sparse pasture.  They make good mothers and have plenty of milk.. up 'till the mid 20th century they were often kept as milk sheep.

The tops (roving) that I buy from World of Wool are 9-10cm staple length and 34-36 micron, but the batts I buy from Alafoss in Iceland are shorter staples and finer.. I don’t have the staple/micron figures for the batts but they are called kemba.

Sampling:
For this sample I have used the 34-36micron tops. 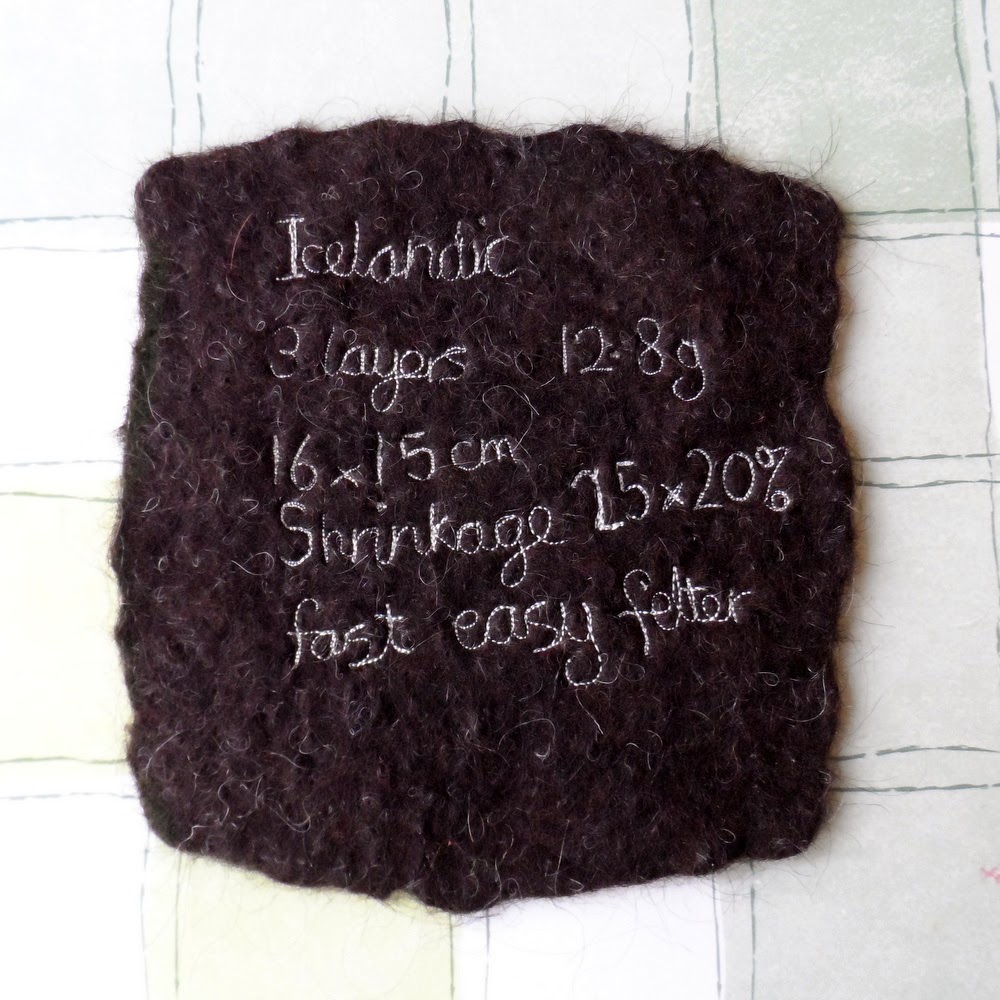 Laid out to the same size as previous samples (20cm x 20cm) with 3 layers of fibre, thoroughly felted to achieve maximum shrinkage.

Observations:
Icelandic is a fast and easy felter; making a firm, hard wearing felt.  The finish is slightly hairy and very tactile.  I find that washing up liquid (dish soap) works better with Icelandic than olive soap.  For healing edges and rubbing I use a plain vegetable soap bar.

Excellent for slippers and bags that will take a lot of wear and tear and for sculptural pieces that need to be structurally strong.  I wouldn't personally use for next to the skin garments or for hats.. I think it may be a little itchy on the forehead. That said bare feet in Icelandic slippers are very happy feet indeed :)

Next time - my Icelandic Project

p.s. don't ask me why I have font changes and highlighted areas on this post.. blogger has gone mad and it won't let me correct it! Grrrrrrr

Posted by FeltersJourney at 14:09 8 comments:

To start playing with the branches I collected recently.  Sunday was a beautiful spring day, so warm it felt like summer.  I spent the afternoon working away in the garden with my husband.. making buttons :)  Gary cut them and drilled them and I sanded them.

I really enjoyed our afternoon, quietly working away together in the sunshine :)  The blackthorn stick was rotting inside when we cut it.. but the hawthorn was so lovely we went out and gathered more of those.. and the beech was good too.   I still have masses of buttons to sand..

I realised that I had lost my lovely lavender beeswax furniture polish which I'd planned to use on some of them.. so I made my own :)  By melting beeswax in a double burner, adding olive oil (1 part beeswax to 6 parts olive oil) then tea-tree and lavender essential oils, mixing well and leaving to cool.  It made a firm polish.. for a softer one use more olive oil.

I became slightly obsessed with attacking wooden things with beeswax on Monday.. It led to me sanding down our coffee table top and waxing it.. much to Gary's surprise when he got home from work.  Must say it hasn't looked this good in years :)

I've already used 2 of my hawthorn buttons.. more on that project soon xx

This better weather really has lifted my spirits.. made me realise the months of constant rain had gotten me down more than I knew.  I just HAD to make something 'Springy'.. but what?


Looking at all the green shoots appearing, a hat grew in my mind :)


I hand stitched glass, stone and copper beads and findings on as and where they felt right

Posted by FeltersJourney at 10:05 7 comments:

The beginning of MARCH already.. I can hardly believe it!  Where I live we haven't had any real snow so far this winter..  it has come down once or twice, but hasn't laid on the ground at all. Wonder if we shall get away without any this year?  There is a definite sense of Spring in the air.. green shoots are appearing everywhere and..

Sunny mornings are my favourite time for wandering in the woods behind my house..

Last week I went searching for branches that have been brought down by the winds.. I want to make rustic wooden buttons.
There were a lot of windfalls.. I came home with blackthorn, hawthorn and beech branches.  And while driving down the lane a couple of weeks ago, the day after a VERY windy night, I found an old oak felled by the wind.. which was a shame.  When the men were cutting it up and taking it away I claimed a couple of lovely branches.. I have been wanting to make a branch flute for absolutely ages and I think these will be just right (and the thinner bits can make buttons :)   There's is every chance that I will fail abysmally at flute making :)  but I fancy having a go.. imagine how lovely it would be if it worked!  So now those branches are wrapped in newspaper and tucked away to 'season' for 6 months or so.

Posted by FeltersJourney at 10:54 5 comments: