Well I had a lovely week last week! Even though my 12 year old was off school ill for 2 days, and I was at work for one of the days - I still managed to have a very productive week; I felted 4 scarfes and a cape - and have listed them all apart from one of the scarves (my goodness Im organised this week :o) 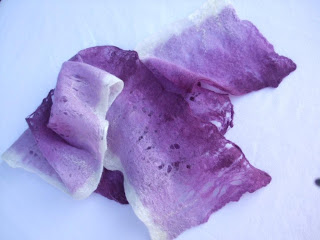 This little lovely is my very first entry into an etsyFAST challenge, Septembers theme is SONGS. This one is inspired by `I want you` by Savage Garden (follow the link to see the music video on youtube)

lyrics:
Ooh I want you, I dont know if I need you
But ooh Id die to find out
Anytime I need to see your face
I just close my eyes and I am taken to a place where your crystal mind and Magenta feelings take up shelter in the base of my spine
Sweet like a chic a cherry cola

The song just keeps on going round n round in my head...just as it stops I catch sight of this scarf & off it goes again - good job I love the song :o) 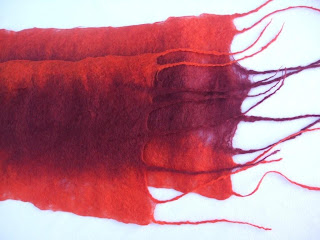 This is my `Days of Embers` scarf. Ive also made an Indigo blue version, and lovely violet/purple which hasnt been listed yet (Im thinking of a name for it...) 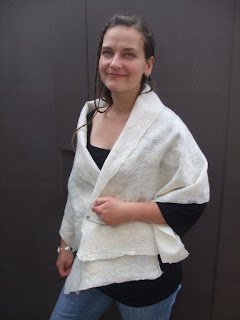 I called this cape `Imagine`.
And apart from my productive felting week, work & poorly wee-ladie; we had a wonderful evening on Thursday!

My mum-in-law turned 60 earlier in the year, all the kids put together to buy her a hot air balloon ride as a special birthday pressie. Due to our English weather, unpredictable to say the least, its been cancelled 4 or 5 times... but Thursday she actually went up! It was incredible; we were right next to it with her, watching it being inflated OMG it was HUGE!!! There were 12 or 13 people in the basket so you can imagine it really was a whopper. I wouldnt of believed it could be so exciting just watching... When they released the balloon it went up so quickly & effortlessly - it was wonderfull & very emotional for some reason. They went upto 3,000 feet and were up for 1 1/2 hours. 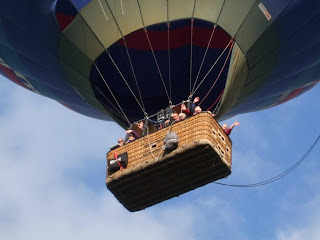 While they were flying we walked around Worcester cathedral and along the river - it was nice. We didnt see the landing (which by all accounts is a very bumpy & undignified affair :). We all went for a meal afterwards, which rounded the evening off nicely. I think the whole family were on a high for the next couple of days, though we were all pretty shattered too for some reason.

We`re getting her a parachute jump for her 70th :)

There she is waving away :)

No felting today though, my son is home for a teacher training day so I have re-photographed most of the things in my shop and spent hours updating that :( boring...
Hope everybody else had a nice week xx

Finished my Day of Felt jewellery

Felt - intertwined, bound together, forever as one - United 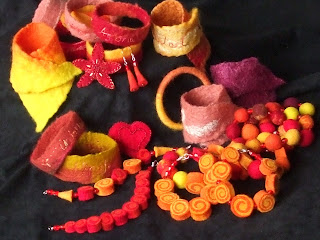 Felt bracelets, bangles & cuffs - some are embroidered, some beaded, some have silk fibres felted in for decoration - every one is individual. 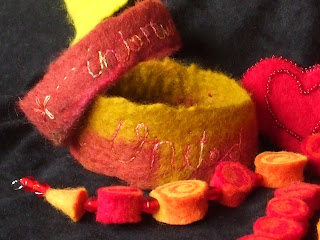 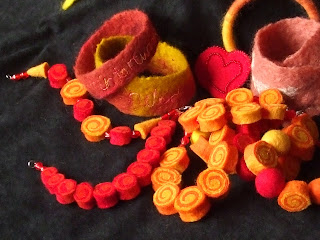 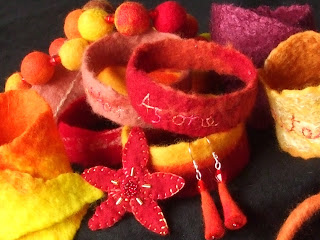 I have invited my family and friends to join in with the Day of Felt on 3rd Oct 09 by wearing a piece of jewellery created by me for this event & gifted to them. I have finally finished all of the jewellery & taken photos - thought Id share them with you :o)
Would any of my readers also like to join in by wearing a piece of my jewellery on 3rd Oct 09? Keiara I know you are joining in sweetie :o) thanks for getting back to me
All that I ask is for you to wear the jewellery on Sat 3rd Oct (& hopefully afterwards too :) to celebrate the first ever International Day of Felt. There is no charge for the jewellery but if you can cover postage costs please. I should mention that the majority of the jewellery will go to friends & family, but there are sure to be a few pieces left.
It is on a first come first served (pot-luck) basis and when its gone its gone, so do speak up if you want to join in. You can either contact me through my website www.FreeSpiritCreations.co.uk or leave a comment here (though you will need to email me privately with your address to post to anyway)
For more information about the Day of Felt: http://www.feltunited.com/ The event is part of the United Nations Year of the Natural Fibre.
Posted by FeltersJourney at 13:19 5 comments:

my Day of Felt Update 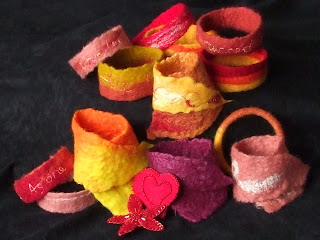 These are the pieces of jewellery that I have finished - Im really pleased with them ... still to come felt bead bracelets!
I shall be giving the jewellery out to family and friends to wear on 3rd October 09 to celebrate the Day of Felt.
Im also planning to extend the invitation to readers of my blog - if you would like to join in please contact me (email me through my website please) do get in touch asap please (if you will be willing to pay the postage please, that will be the only cost).
More details and photos will follow when the beaded bracelets are done.
Posted by FeltersJourney at 16:08 2 comments:

Ive managed to take some photos & thought I would share them with you :o) This is my wrap for the Day of Felt - 3rd Oct 09. 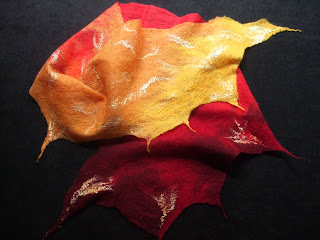 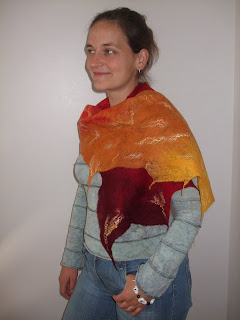 Im thrilled to bits with this wrap - its just what I wanted. Its felted from merino fibre in shades of red, orange & gold with golden silk fibre felted in for luck! It was also my first large scale cobweb felt project and I really enjoyed it! So much infact that I have since made another 2 of these lovely wraps... Ive just listed the Woodland Wrap on etsy; gorgeous greens - I love it!

Having a bad hair day!
Posted by FeltersJourney at 17:12 2 comments:

Felt - intertwined, bound together, forever as one - United
This is really exciting! The United Nations declared 2009 the `Year of the Natural Fibre`.
A group of felters set up FeltUnited and sent out an open call to all felters to join in on 3rd October 2009 for the first International Day of Felt. There are going to be felt exhibitions and workshops going on all over the world that day! The theme for the day is `a slice of the colour wheel - red to yellow`. The UN have listed the Day of Felt as one of their events.
The last couple of weeks I have been up to my elbows in red, yellow& orange fibre :o) I`m working on jewellery & phone charms to give to family & friends to wear on the big day... I have created a gorgeous wrap for myself - which I love so much that I promptly created 2 more (in different colours) to go in my etsy shop. I havent managed to take many photos yet but will post them asap.
Here is a little taster... these are some of my beads 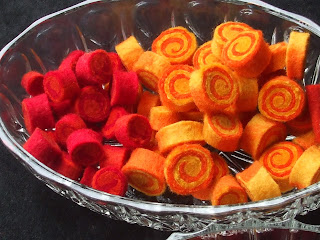 Left
my 1st ever sushi beads 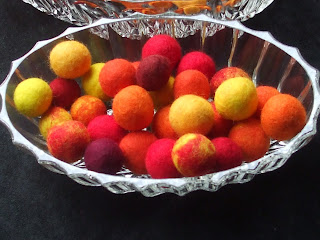 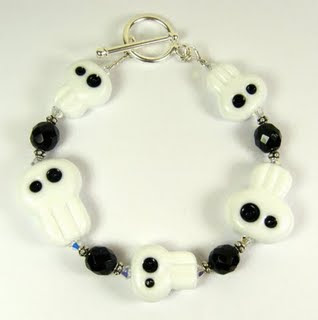 Yeaaah! This morning when the postman came it felt like Christmas! My goodies from the swaps with Keiara arrived!

This is my Spooky Skulls bracelet - isnt it CUTE?! I just love it!!! This isnt for Halloween - Im gonna live in it all year round :o) I thought this bracelet was lovely from the photo - but have to say the photo doesnt do it justice... It is so glittery and the black & white is so sharp & prisitine, swarovski crystals and small silver beads compliment the skull really well, and the sterling silver clasp & findings are perfect with my sensitive skin.

I also have a Desert Tree focal that Keiara has made into a fabulous necklace. Now I did originally post a picture here - BUT, this necklace is for a special birthday pressie and I dont want to risk ruining the suprise if its spotted on my blog! I shall post pictures after it has been given.
Keiaras workmanship is absolutely exquisite! Each bead is absolutely perfect and ooooozes quality; glowing with inner and outer beauty, they have a lovely weight to them and they sparkle oh so prettily. I have now purchased/traded 5 pieces of jewellery byKeiara and they are all SO individual & quirky & stylish - I love em!!! The hard part is giving away pieces brought for presents...

Posted by FeltersJourney at 14:00 No comments: 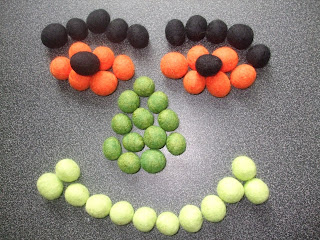 At the weekend (while catching up with all the holiday washing) I made a few beads :o)

These are for swapsies with the lovely Keiara who wanted some black, orange & green beads for Halloween (the dark green are a merino & silk blend - very lushious).

Im really excited about the swap... I shall post about it and show off my goodies as soon as they arrive :o)

Hope you are all having a good week
D x

Posted by FeltersJourney at 10:08 2 comments: