I just came across this AMAZING video on Pinterest!  It's a documentary about felt / felting by Judit Pocs and is wonderfully inspirational!

The video covers the journey from sheeps back, through cleaning, dyeing, carding and then steps into Judit's studio.. and this is the real treat!  You get to watch her creative process through several different projects; a FABULOUS Noah's Ark rug, nuno scarf, hats, and sculptural critter.. it is such a lovely glimpse into a wonderfully artistic mind.  With lovely music and animation throughout.

It lasts about half an hour, so go make a cup of tea and enjoy :) 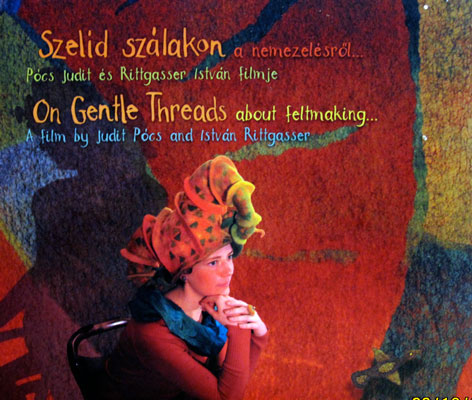 I must keep my ear to the ground for upcoming workshops :)
Posted by FeltersJourney at 11:33 14 comments:

What a wonderful summer we have had here in the UK this year!  It may of come late, but it has certainly made up for lost time.  I haven't really posted much over the kids break (which is now almost over.. it's gone quickly!).  It's time to start catching you up with what's been going on :)

We've had a lovely camping holiday in Cornwall.. the weather was great!
It was a differently paced holiday than usual.. our dogs (who always come with us) are getting a little older and need a slower pace.  The first couple of days we took some lovely long coastal walks, then the rest of the week was pretty much spent in the sea!

Although we often had to take it in turns staying behind with the dogs, taking them on small, gentle walks etc.  It's such a shame that they aren't allowed on Polzeath (our favourite surf beach) during the summer..  The days we went kayaking on Daymer Bay were lovely I got first go in the kayak with Gary while the kids kept the dogs company, then we swapped and I strolled along the beach with the dogs, paddled and sat on the cliff watching the world go by, while Rachael swam and the boys kayaked.  Amber was funny.. she swam out to the kayak (she could hear Gary's voice) climbed aboard with a little help and rode it all the way back in :)  She was like a little tug boat going through the water, she was so determined to get there.
Other days were spent entirely at Polzeath with the boys kayaking, Rachael and me bodyboarding.. (it was too choppy for me to want to kayak).  We picked up a waterproof camera in the bargain bin at a local electrical store a few months ago, and we got some fun action shots and some silly videos too :)

Our very last day was grey and rainy.. but it didn't start raining till we had packed the tent away thank goodness!  The rest of the day was spent body boarding, and you honestly couldn't tell it was raining in the sea lol

I have never seen as many jellyfish in my life - there were HUNDREDS.. many different varieties.. and they were everywhere.  We all got stung once or twice, but poor Rachael managed to get lots of stings on the palms of her hands and fingers from swimming and body boarding.. and they were really sore.  It didn't stop her boarding though!

Back home we are getting a plentiful harvest from the fruits and veg we grow in the garden.. I LOVE eating fresh home grown produce!

Next weekend I am camping with a friend.. my first ever time away from the family.  And then Rachael goes back to school, Matthew starts his apprenticeship, and of course Gary is at work.. I shall be diving back into my wonderful woolly world.
Posted by FeltersJourney at 11:28 5 comments:

I must admit I'm a bit of a duffer when it comes to social media.. but I do like Pinterest!  It's a bit addictive I think.  ANyway.. I just wanted to share this bag I made recently.  Inspired by this beautiful ancient Egyptian blue faience bowl that I spotted on Pinterest.  This is my felted bag version of it :)


I didn't take any more making photos, but here are a couple of close ups