Fibre of the Month for April - ALPACA

This month I am looking at Alpaca fibre.

There are a couple of different types of alpaca; suri and huacaya, suri have long silky hair while huacaya is shorter and crimpier so more similar to wool than suri.  I have used huacaya from my sister-in-laws pet herd.

Alpacas are gentle, friendly animals and I know my sister-in-law says her 15 are very easy to care for.  I have heard stories of alpacas 'guarding' chickens from foxes too.. they have a strong herd instinct and other animals that live with them become part of the herd and therefore get looked after :)

Alpaca are camelids, closely related to camels and llamas.  They originate in The Andes, South America.  Their fleece was widely used by the ancient Incas.. archaeologists often find grave goods made from alpaca fibre.  There are 22 recognised fleece colours.  The fleeces don't have lanolin in so they don't feel greasy when raw.. they do tend to be very dusty though.

According to the British Alpaca Society an average alpaca will produce 2.4 kg of fibre per year, sometimes more.  The fibre can be very fine, as low as 15-16 microns.  The finest fibre an animal will produce is in it's first year, as they get older the coat gets coarser.  There are less scales on each individual fibre than wool has, this is what gives its' lustrous appearance.  The fibre is also filled with microscopic air pockets, which not only make it lighter weight but also increase its' thermal properties..  alpaca fibre is warmer, and apparently stronger, than wool!


Sampling:
For this sample I have used raw white alpaca fibre.. I didn't realise it at the time but it was the coarser fibre from the legs and neck. 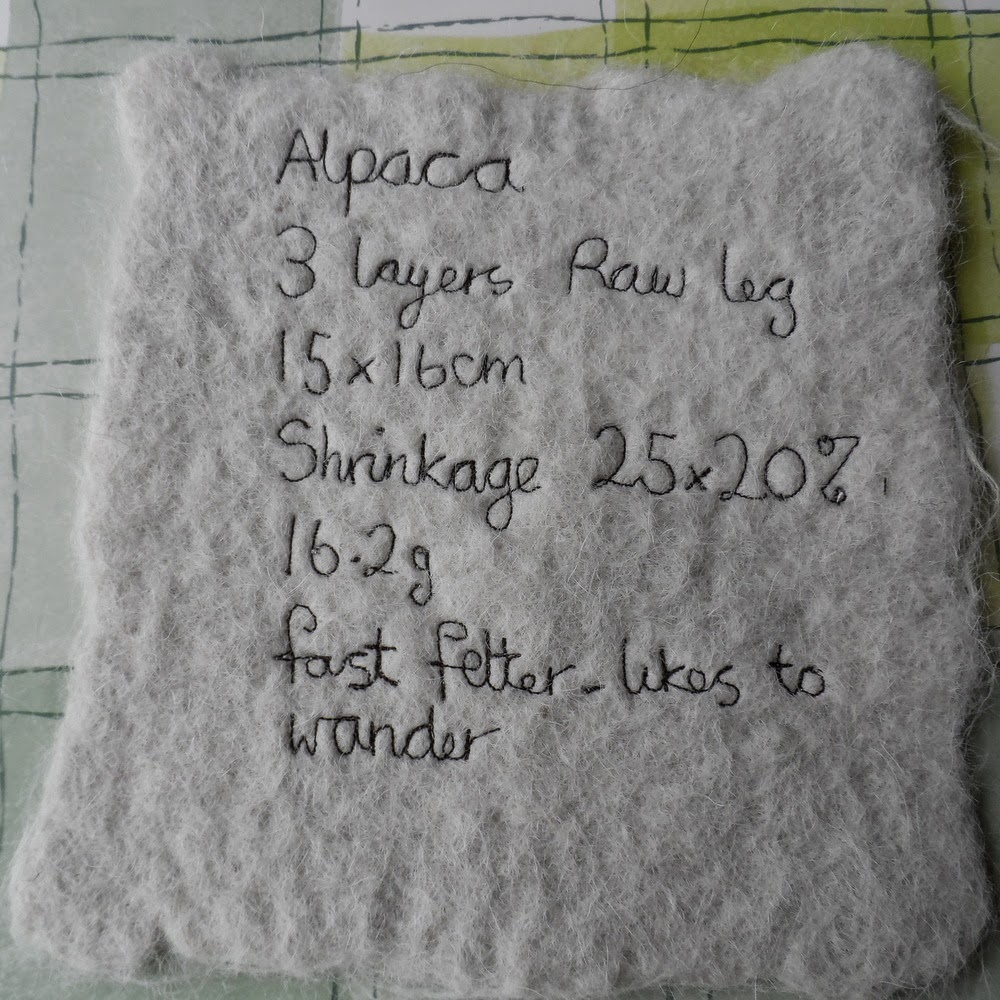 Laid out to the same size as previous samples (20cm x 20cm) with 3 layers of fibre, and thoroughly felted to achieve maximum shrinkage.

Observations:
Amazingly, considering that there are less scales on the fibres, it felted really quickly!  The three densley packed layers produced a thick, strong felt.. which feels hard, but soft at the same time..  The density of the felt is hard, but the surface is soft to touch.

Next time: ALPACA project
xx
Posted by FeltersJourney at 17:21

Very intrigued by this as I have a large bag of Alpaca. I have been using it as core wool for needle felting. I am intrigued by the idea of wet felting with it. Not something I do as often as the needle work
Thanks for the posts.

Thanks Charlotte & Zenitude, glad you are finding my experiments interesting :) My alpaca projects so far have been very simple.. hope they don't disappoint..
xx

Alpaca, and especially baby alpaca, is my favorite yarn to knit! Oh, the softness!! I've wet felted and needle-felted with it too and LOVE it. And aren't they just the cutest animals???

I love huacaya alpaca for felting. I did try suri, I just got a lot of loosely attached curls, which could be useful in certain projects :)

Nancy I brought some toffee coloured baby alpaca top a few years ago and spun it into the softest yarn ever! I used it as hair for a very specially angel doll for my Nan.. haven't used the rest yet though, I'm saving it for something else special :)

Zed I've never even seen suri alpaca.. and I'm intrigued now :) Maybe I shall see some at Wonderwool on Sunday..

If you really want to enjoy alpaca, try a 80% alpaca 20% silk blend. Oh dear word is it beautiful! Once again I am learning so much from these posts!

Thanks for the tip Kelly! I shall definitely try it.. maybe for spinning too..
I really must post the alpaca project! I have been busy playing with my darling friend Heather the last few days
xx