Last weekend I visited Wonderwool Wales with my daughter Rachael.. meeting lovely friends (more later) while we were there :)  I've only been to Wonderwool once before about 4 years ago, I was amazed to see how much it has grown!  It was at least twice the size..  I actually had a bit of a panic at one point wondering how on earth we were going to manage to see everything in one day - thank goodness we were there early!

I did take photos.. but most of you will know how forgetful of my camera I can be, there was soooo much more that I should of taken photos of!


There were many amazing and beautiful stalls..  I didn't take photo's of many :(  But here is what I've got.. 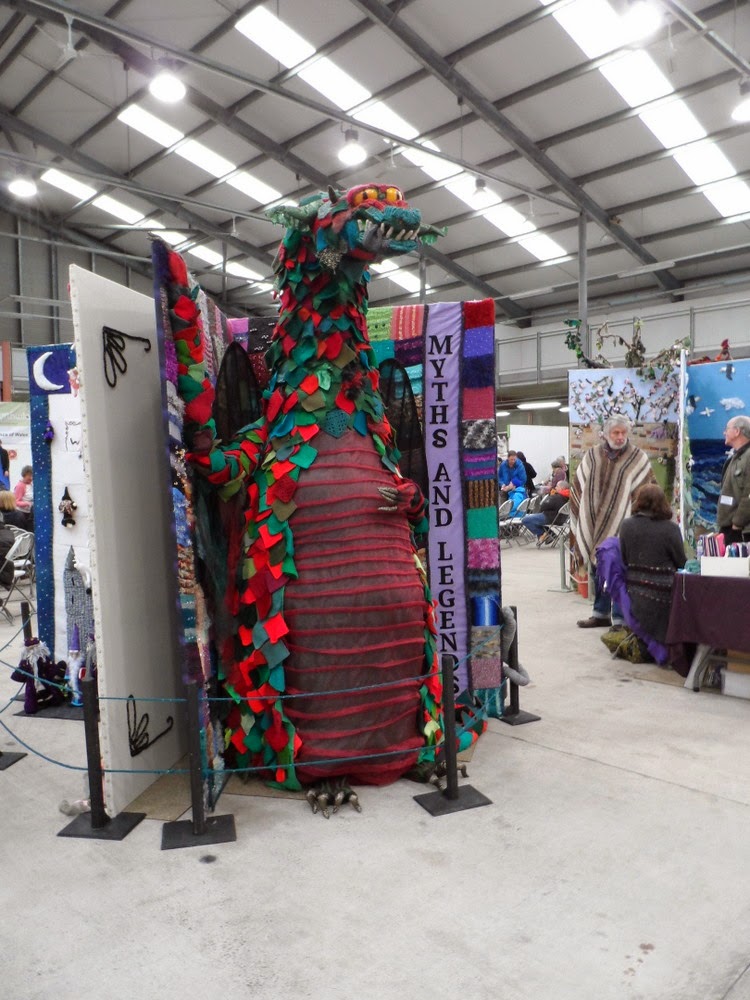 These events are such a great opportunity to meet folks you know via the internet, and also to catch up with old friends.  I had been waiting to meet Zara of InnerSpiral for ages.. we have chatted via email for quite some time, it was lovely to meet face to face.  I had a visit with Paul and Mandy at ClassicCarder :)  they are always good fun.

I also met the lady responsible for all of my woolly madness.. Debbie at MulberryDyer, and would you believe I forgot to take a photo!  It was about 11 or 12 years ago that I went to Debbie to learn to spin on a drop spindle.. this was part of my educational museum work.  I spent a wonderful day with Debbie and her partner John, up to my eyes in fleeces and fibres.. and completely fell in love with it.  Felting was of course mentioned and when I got home I started to research and dabble.. you know where it went from there! :)

One of the MAIN reasons for attending Wonderwool this year was to meet my wonderful darling friend HEATHER.. who was coming to stay for a few days!  I was SO excited to finally meet this lovely lady, we have been internet friends for years.  Heather was with Pearl.. a UK felter whom I did not know before.. who is quite lovely and instantly became a friend :)

I had been worrying about finding Heather.. we'd both agreed to wear our brightly coloured felt coats so we stood out :)  Turned out I needn't of worried.  Driving to the show took almost 2.5 hours from our house, about half an hour before we arrived I noticed I had had a car driving behind me for a while.. it was raining hard, roads were twisty and driving conditions not at all pleasant, so I was going a little under the speed limit. Passing through a village we picked up a couple more cars behind so I decided to pull in and let everyone pass me by.  I was rather surprised when the car behind also pulled in, I thought this most odd and drove off as soon as the other cars had passed.  Well this car kept on going the same way we were.  There were 2 possibilities.. Heather was in the car behind, or it was an unmarked police car.. even though I knew I hadn't done anything other than travel at 50 rather than 60mph in heavy rain,  I was really hoping it was Heather. When we stopped at the turn in for the Royal Welsh Showground my mind was put at rest, looking in my rearview I saw big happy faces and waving hands ... Heather and Pearl :) we met before we'd even got there lol.

I don't have a photo of the girls at the show, which is a real shame.. This was taken on Monday morning just as we were getting ready for our first play day

I've never been called a 'treasure' before, Deborah...how
delightful!! Grin.
(I had such a wonderful time with you and your sweet family. I was treated like a queen...and I know you know a little something about royalty!)

Well you are a treasure :) We enjoyed having you here!

I'm afraid the extent of my involvement with royal events was waving a flag in my chubby little hand at the Silver Jubilee as the Queens carriage went by .. I WAS about 4 I hasten to add lol :)
xx

Love to see you both enjoyed the wonderful time together after years of communication. With Heather's cheerful character you found time flies.

Oh Terrie, it really did fly by! I'm so happy and glad to of finally met Heather.. she is lovely!
xx

Wonder Wool looked fabulous - I think you did buy half of it looking at your table! Thanks for posting the photos - I adore that life size sheep.

Oh Lyn.. I could of brought soooo much more, but I was being 'good' :)
Dxx