Had a nice couple of weeks.. Gary had some time off work and though he did 4 long hard days work at his moms house, we have had some nice days out together while the children were at school.  Between time spent with hubby & days at work I havent had any time for felting... I should get a couple of days this week though hopefully..
I have however had time to play around hammering copper!  I started tinkering with it because I seem to be getting a touch of arthritis in some of my fingers.. which I absolutely do not want.  SO I decided some copper jewellery was called for (I have heard that its good for curing/preventing arthritis).
Kept it nice and simple & rustic (bit like me lol).  It didnt take long for Rachael to ask me to make her a copper bracelet too (no suprises there :).  I decided to make a mother & daughter set using another of the pretty shell buttons, and take some photos as I did.


I used my round nose pliers to make a tidy little hook.
Ideally I would of hammered it on a bracelet mandrel, which would make it stronger... but as I dont have one I make do with whats available. I bent the bangle into shape around a small china vase :) 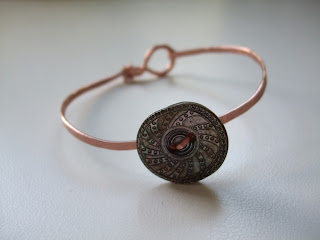 My girlie is very happy with it.. she has just come down the stairs in her PJs (lazy Sunday morning) with it already on. 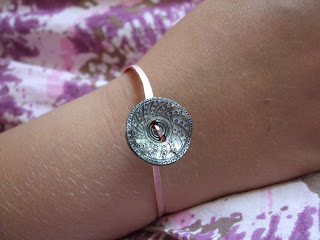 xx
Posted by FeltersJourney at 09:18

How beautiful!! I hope the copper works for you. Every time I see someone with one on, I ask whether they think it works for their arthritis, and they always say 'yes'! XXO-

What beautiful jewellery. Thank you for taking the time to show us the process as well as the finished product. Such an unusual shell button, I think it would have been lost on anything woolly! It complements the copper perfectly.
Becky x

Simple and chic bracelets. I may have a go with my ceremic buttons. Thanks for sharing and your sweet comments on my nuno felt dresses.

Very nice, and the pictures are fabulous. I like how you used the button, perfectly simple. I think it's sweet how your daughter wanted one too.

If this helps with arthritis, I must give it a try! Love the tutorial.

Thank you all for your lovely comments :)
Glad you like the process pics - must keep doing this xx

Thanks for the tip Pyxee :)