Gary's birthday (Monday) went well..  he loved the folder and laughed his socks off over the horrid hairy helmet!  I was quite surprised while washing up at lunch time to see him strolling into the kitchen modeling it in his birthday suit :)  That was a laugh!  We had a lovely day, and an even nicer night out with most of the family.

My weekend was spent ducking and diving trying to get his cake iced in secret.. easier said than done.  It didn't turn out as I had pictured it.. mostly because there were so many mistakes and mishaps along the way. 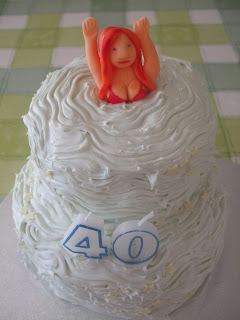 I had decided to make him a cake with a lady jumping out of the top.. I rather naively thought 'no problem - it'll be an interesting challenge' HA.  What I didn't take into account is how long its been since I iced a cake (7 or 8 years) and the simple fact that I was having to do it on the sly and hide it away from my husband!  (I don't want to bore you.. the rest of this post is my catalogue of mini cake-related disasters.. so please stop here if you aren't that interested :)
I made the lady from icing and painted her in a nice peach foodcolouring; I used it for her skin, hair and bikini.  Stupidly I decided to paint the back of her bikini while she was laying face down on a soft towel.. of course when her bum was dry and I turned her over to find she now had a boxers nose (flat)  Never mind..
We don't like icing or marzipan on our cakes, so I decided to just use a thin layer of icing.. I knew this is what I always used to do.  What I forgot is how I used to cover the cake with butter-cream icing BEFORE putting the rolled icing on to smooth out the surface.  I did have a vague recollection of brushing apricot jam glaze onto the cake before icing it.. and did that.  Of course when I put the icing on I couldn't smooth the darned stuff out no matter what I did!  I ran out of time at that point and had to leave it till the next day.
The only thing I could think of to try and save it was frosting, which I've never used or eaten before (but now really like!) I brought a can of American Frosting thinking I could smooth it over my bumpy sponge cake to get a nice smooth surface.  I tried to make it blue.. after adding a couple of spoons of the cheap blue foodcolour brought from our local supermarket I got the blue-ish grey you see above, I think I could of added the whole bottle and just about got a true blue..
When I tried peeling the icing back off - the apricot glaze had virtually welded it onto the sponge!  I eventually got it off and started dolloping frosting on .. only to discover that it doesn't really like being 'smoothed' onto cake.. I could NOT get it flat.  The more I tried the more it started coming back off and bringing crumbs with it.  So I took a fork to it and make swirly patterns and covered the worse messy bits with white chocolate stars.
I was getting in quite a panic, thinking OMG how can I take this to a restaurant to be carried out and presented to him in front of everybody?
I decided to keep going and see how it turned out.  I stuck my iced lady into the hole that I had cut and stood back to look....and she started leaning back further... and further..  till she broke in the middle - oops.
Which is why she ended up so deeply stuck in the cake that she looks more like a swimmer waving her arms for help... maybe I should of added an iced sharks fin swimming up the side of the 'waves' he he.
Anyway..  When it was all done I thought it wasn't too embarrassing after all.. and in the end everyone enjoyed it and the only thing Gary was embarrassed about was us singing happy birthday (and the big flashing 40 badge his sister made him wear :)
xx
Posted by FeltersJourney at 17:35

The cake is wonderful and thanks for an entertaining post!

haha Deborah, the trials and tribulations of making a secret cake but it worked and it looks great, You hubby obviously loved the hairy hat, it must have been warm enough if he strutted around naked with it on lol
Glad you all had a good night and now you can say, it was worth it :)

Deborah--I think the cake is AWESOME...and so much love and thought and care went into making it, too. I can't imagine anyone not being thrilled with such a work of art, esp. the bikini clad lady!!! Wonderful!!
I also love that your husband wore 'only' his hat into the kitchen for you!!!!! Perhaps the wearing of this hat will now be a little signal between you two... for when one of you wants a bit of 'amore'?!?!?! Giggle.

Thanks Annie & Lyn
xx
Karen, funny thing is it was bloomin freezing! He certainly didnt stand around for long.. it was more of a flit :)
x
Heather, I think the wearing of cave-man hair might just be the oddest seduction technique I've heard of lol. Might be a bit off-putting :D
x

You're so thoughtfulness and such a fun day with all. Certainly the bikini cake bought some laughs. Glad you all enjoyed.