The snow is falling HARD and fast today.. the whole morning was spent as a family digging the road out, I was glad after an hour and a half of digging when other neighbours started trickling out to help.  I'll probably be stiff as a board tomorrow and the way it's coming down we shall have to dig it all out again!  At least it looks pretty.. and we don't have to drive anywhere this weekend.  Matthew has built a humungous snowman on the front garden, it must be 7 feet tall :)

I started off by making a beret over my usual circular resist, cut from foam floor underlay. 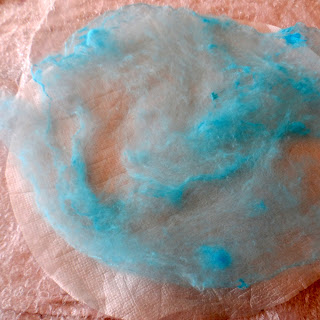 The first thing I put down over the resist was some bright blue silk caps, followed by a layer of white, then a layer of coloured fibre.  On one side I 'drew' a spiral in the centre, then worked it as usual.  I forgot to take photos of this (what a memory!)  I used my hat block to shape the crown so it's more fitted than a beret.

Once the crown was felted I made a long narrow strip in the same fibres (1 layer each of white and coloured), and used thin strips of coloured fibre and yarn (the same ones as used for the spiral) to make stripes all along the length.  This long strip would become the brim.

Next day I added a row of quirky green buttons.. just for fun (and cos I have a secret button fetish lol) 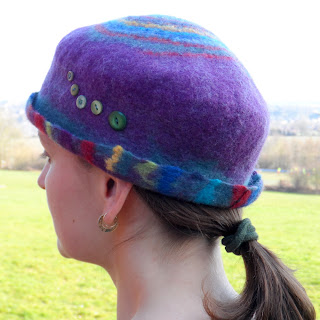 Have a good weekend
xoxo
Posted by FeltersJourney at 16:03

Love your bowler the colourful brim is fab!
Ali x

That is sooo cute!

Gorgeous hat! I especially love the touch of the buttons and love seeing how it was created too.
Enjoy the snow - none with me in Kent at all...yet!

we have snow here too, where did spring go! Love the brimmed hat and the buttons just add to it, ali

Spiral, brim and buttons all are so match. Colorful in a snowy day !

Thank you ladies :) Good to hear you like the same bits that I do.

It hasn't stopped snowing here yet! What a downfall.. though no digging for me today, I got to stay in the warm :)

Deborah--Your new hat is so colorful and pretty! The 'stripey' brim helps to brighten the overall look when worn (since so much of the cute embellishment is up top) and I love the buttons...adorable! XO-

Hi lovely, we had so much snow we were snowed in! Have to tell u how much ur inspiring me I'm loving ur hats and bags and guess wat at last I started using my lovely fibres from u' I started felting and I am totally hooked! thank u x x

Yay Ruthie you are felting! I'm so glad you are getting on well and enjoying it - told you it was addictive lol :D

We didn't get as much snow as you.. but more than we have had all in one go for years! It was very pretty.. but I'll be glad when it's gone and we get some nice weather now.
xx

The hat is beautiful!

What a wonderful discovery this blog! Your energy is bright and creative and what a fun read with all the photos to illustrate! Thank you!